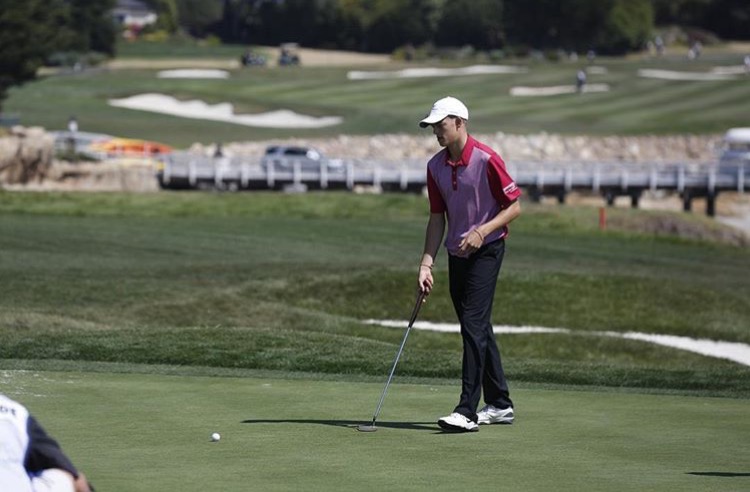 Senior Drew White lines up a shot at a match in Pebble Beach, California.

The Annandale Atoms Varsity Golf Team had to battle a rainstorm as they headed to Twin Lakes golf course for their Patriot District Conference tournament.

Senior Drew White was able to manage with the rain and finished in second place which gave him the opportunity to compete at regionals. White shot an 83 at regionals which was not enough to qualify for states.

“I didn’t like the course very much and I was not playing good golf,” White said.

White believed he did not perform to his full potential.

“It was a tough way to end my high school golf career like that,” White said.

The conference tournament was a two-day event with the Atoms facing off against their Patriot District Rivals, such as the Lake Braddock Bruins and the W.T. Woodson Cavaliers. The Atoms competed hoping to have many boys qualify for the regional tournament.

With their high hopes of dry land during the tournament, they instead faced constant and continuous downpour. The rain played a major factor in the whole event, causing many obstacles and complications for the players.

“We had to stop halfway through because of the thunder,” senior Drew White said.

The rain affected the performance of many at the match.

“Golf is a mental sport that will get to you sometimes,” White said.

After the delay, the players had to face an even bigger obstacle.

“We then had to restart and only played 9 holes” White said.

Not only did they have to restart the game, but due to the rain they had to be cautious of getting wet as it could affect their mentality and performance.

“The key to playing in the rain is staying as dry as possible and many of the players were not adequately equipped with the proper [rain] gear,” White said.

In addition to not being properly dressed out for the weather, the Atoms also had to face the chills of the rain. Due to the cold weather, the players on the team weren’t able to swing the club correctly.

“Some shots couldn’t be hit because it was so wet,” junior Ian McClelland said.

The team also had to be cautious to remain as dry as possible to maintain a good grip of their clubs while swinging.

“We had to keep our grips and hands dry or else the club will fly out of [their] hands,” White said.

The rain furthermore affected them by influencing their audience turnout. Golf matches would usually have parents and supporters, but the downpour prevented that.

“On a sunny day, golf will get parents, but with the rain, it was mostly coaches and a few dedicated parents,” White said.

The lack of support at the match also played a role in affecting the performance of many of the boys. The Patriot conference is also one of the toughest conferences in the region in many sports which made the match more challenging.

The team had difficulties executing throughout a majority of the afternoon.

“The team was struggling in putting four solid scores together,” White said.

“Many are playing for their first time,” White said.

The Atoms had a great season with Senior Drew White going to Pebble Beach, California, and competing internationally. Despite this, they question is if they will improve their game, next season.

“This year we don’t have anybody who is a sophomore or freshmen,” McClelland said.

This causes a new inexperienced team in the years to follow.