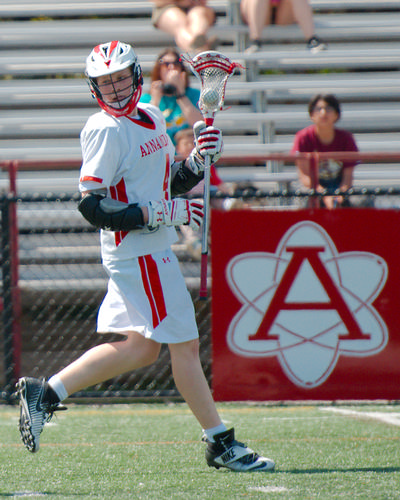 Boys varsity lacrosse had a disappointing end to a disappointing season, as they fell 17-3 to South County in the first round of districts. They ended the season with a record of 2-10, a slight improvement from last year’s 1-11 record.

Many on the team were disappointed with their season, but they still had fun playing lacrosse.

“It’s tough when you don’t compete in games, but the players got better as the season went on. Hopefully, being the eighth seed will motivate those who come back next year to climb the ladder,” Head varsity coach Bill Maglisceau said.

The players believed their season didn’t meet expectations too.

“I think the season went well. At first it was kind of rough, but at the end we were playing as a team. I thought we were gonna have at least five wins looking at the game schedule in the beginning of the season, but sadly we only won two. But I gave it my all and that’s all I could do,” senior Michael Nguyen said.

“The season was a little disappointing, but overall it was pretty exciting. We expected to win more games than we originally did but things just didn’t go our way,” sophomore Sam Phan said.

Senior Brent Escueta noted that their record of 2-10 was an improvement from last year’s record of 1-11, but he was not satisfied with the end result of the season.

“Though, I did have a good time playing lacrosse at Annandale for my last time,” Escueta said.

“My expectation for the season was to give the guys an extraordinary experience, and the guys on JV and varsity got that. We had a good group of kids who enjoyed practicing and playing in the games. We also experienced some success, winning two games in a row against Falls Church and Jeb Stuart, which was fun for the guys and we’re looking forward to trying to get more wins for next season,” Maglisceau said.

Maglisceau hopes his players work hard in the offseason to ensure that they are in prime shape come lacrosse season next year.

“We’re hoping to get everyone to a team camp in William and Mary, and getting the guys to do more sports in the offseason so that we will become more competitive,” Maglisceau said.

The players realize they will need to put in work during the offseason as well.

“It’s going to take a lot of work [in the offseason]. I think mentally, and physically, many of the underclassmen just aren’t there yet. They’re gonna need to work out, train, go to camps, and play together as much as they can,” Escueta said.

“We can improve by working hard in the offseason and improve our team chemistry on and off the field,” Phan said.

Phan and other underclassmen plan to push themselves this offseason. They have this season ingrained in their minds, and will be looking to use this season as motivation for next year.