Volleyball sets up for season 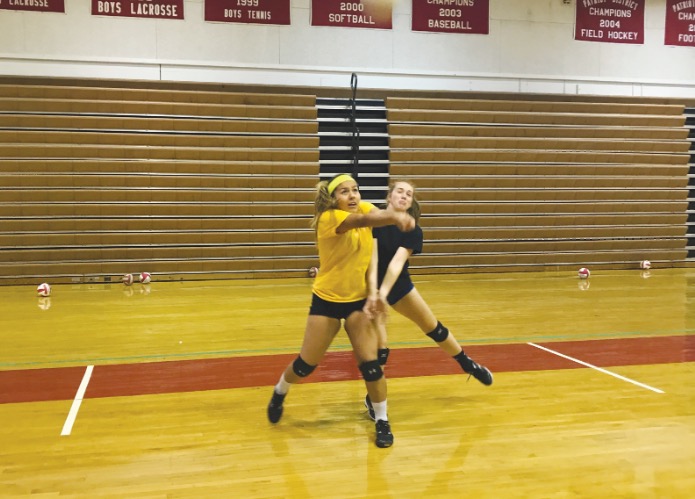 Senior Valeria Salinas (Left) goes for a bump during practice.

The Atoms volleyball season is underway as the team began official practices as well as having competed in multiple scrimmages. The Atoms’ first scrimmage took place on Aug. 16 against the W.T. Woodson Cavaliers.

The Atoms were defeated by the Cavaliers 3-0 but also competed in an extra set after the scrimmage for extra practice in which the Cavaliers were victorious.

The team’s next scrimmages took place on Aug. 23 against the Jeb Stuart Raiders and Woodbridge Senior, both scrimmages in which the Atoms were defeated 3-0.

“We played a really close scrimmage against Stuart,” senior Jessica Roop said. “We may not have won, but we felt like everyone showed up to play as a team.”

The team has set forth a number of goals to improve upon weaknesses for their regular season opener and beyond. With more practice the Atoms look to strengthen fundamentals and allow for no targetable weaknesses in matches against other teams.

“One of the goals for our team this year is to improve our defense so that we can beat other teams,” senior Valeria Salinas said. “We don’t have as much height as most of our competitors this coming season so our defense will be important.”

One key way the team plans to improve overall as a whole throughout the season is by communicating more on and off court.

Better communication as a unit will allow the team to avoid miscues and miscommunication during important games while also increasing player confidence.

“We want to improve as a whole by communicating more on the court to prevent small errors during matches,” Salinas said. “We can encourage each other so we can become more confident with our playing.”
Another vital factor for the team’s success this season is contribution from each player as well as strong cohesiveness as a unit.

Through this the team will be able to eliminate weaknesses and be better prepared for each game.
“We all contribute something important to the team,” Roop said. “So that way all of our strengths make up the team allowing for their not to be many weaknesses at all.”

One weakness the Atoms look to improve before the regular season opener is serving. The team has showed strength in being able to adjust to sets by rising for a kill or keeping in play, however the team looks to better their serving.
“A weakness we have as of now is our serving,” Salinas said. “We have strong servers but some of us are struggling to keep it in.”

The Atoms’ first regular season game takes place on Aug. 29 against the Thomas Jefferson Colonials at home followed by a game on Aug. 31 against the Lake Braddock Bruins on the road.