Wrestling faces off in Nova Classic 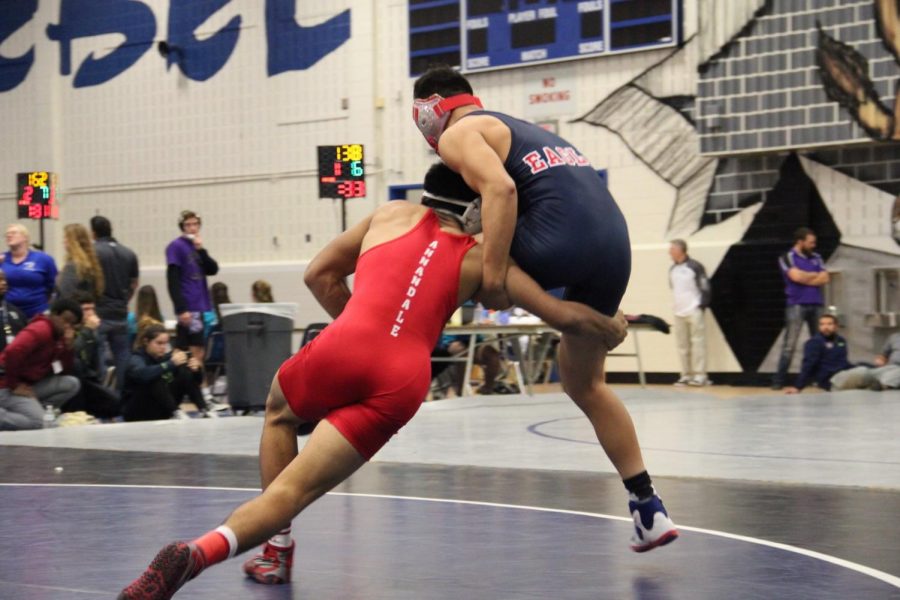 Senior Allen Kokilananda takes down an opponent at a meet against the Thomas Edison Eagles last year.

On Fri. Dec. 8, the Atoms varsity wrestling squad participated in the Nova Classic tournament.
The Nova Classic tournament is used by many teams to measure the team’s strengths and weaknesses or improvements that need to be made over the course of the season, and the Atoms wrestling squad has participated in it for many seasons.
The Atoms successfully finished in tenth place out of 32 teams with 86 points.
“The whole team especially the freshmen stepped up big time to help us achieve this,” senior Allen Kokilananda said. Kokilananda represented AHS at the competition and ended up taking second place for the 145 weight class behind Julio Alegria of North Stafford High School.
Originally, the tournament was set to take place over the course of Friday and Saturday, but more matches had to be scheduled on Friday as the Saturday portion of the event was cancelled due to impending snow.
This meant that all matches would have to have been completed in one day.
Before going to the competition Kokilananda was undefeated but things did not end up going his way.
“Competing in double the matches in one day took a negative effect on my stamina. I fell short of what I wanted to accomplish during the tournament. I had a goal to win the tournament and remain undefeated. However, I lost a tough match in the finals and took second because I was eventually unable to react to my opponents quick movements fast enough,” Kokilananda said.
“Overall, it [the tournament being just one day long] impacted the stamina of the whole team, not just me, because we had to wrestle more matches on Friday in order to finish the tournament” Kokilananda said.
According to Kokilananda, his coaches and their persistence to make him work in practice has helped.
“Practice has improved Annandale greatly to help us improve our game from crazy conditioning with Coach Klein to the important technique with Coach Sweet and Coach Ho,” Kokilananda said.
With the tournament results finalized, the Atoms varsity wrestling squad now has an idea of what improvements need to be made before the end of the season.
However, no teams from the Atoms’ district consisting of Mount Vernon, West Potomac, Hayfield and T.C. Williams competed in the tournament so it is hard to tell how Annandale is currently doing in their conference.
With this tournament passing, the Atoms can start to feel more confident as they are in the top ten of all high school wrestling team in Northern Virginia that participated.
This confidence from the tournament can give the team just what they need to have a successful season and achieve more goals that they set in the future.
Kokilananda believes underclassmen stepping up was instrumental to their success in this meet.
“The freshmen should be proud for all of their work to step up in this big meet,” Kokilananda said.
This confidence could give Annandale just what they need to win big meets for the rest of the season.
“Annandale accomplished their goals and succeeded in a meet where conditions were not ideal or on their side,” Kokilananda said.
The Atoms varsity wrestling squad will only get better when their stamina is positively impacted by wrestling less matches in one day.
In other words, this tournament does not set in place the actual conditions for other tournaments in terms of how many matches take place in a certain time period.
In most tournaments, there is more time between matches to rest and rebuild strength since there is more time to complete brackets to determine a champion for each weight class.
“Thank you to the parents, friends, coaches, and teachers for all of their work put into the program,” Kokilananda said.
He believes his success is not only due to his own talent, but the support he receives from others.
As the team receives continued support over the rest of the season, they will look to close out their season on a high note.