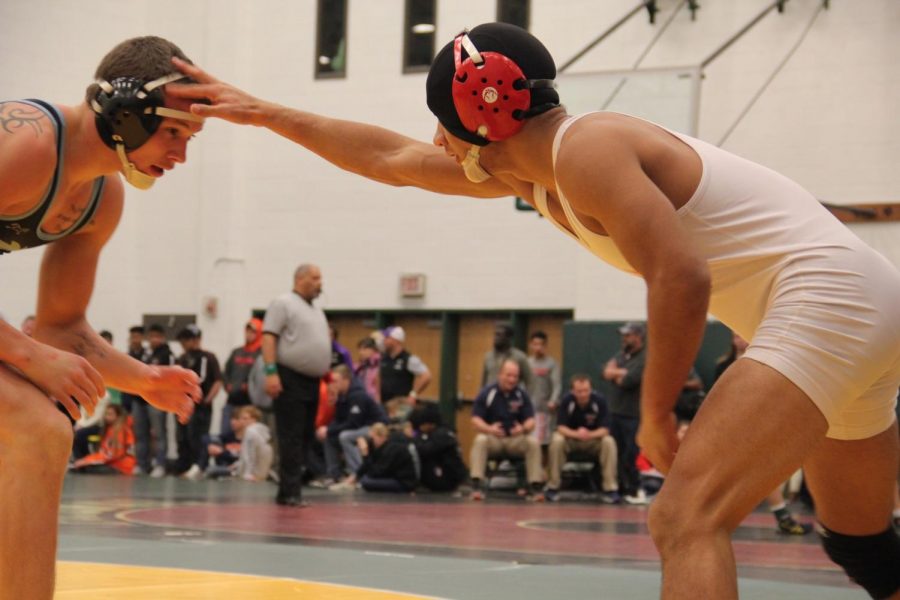 Senior Allen Kokilinanda sets up to wrestle against an opponent at the Raider Classic tournament at Jeb Stuart High School on Sat. Jan. 13.

The Atoms varsity wrestling team fought hard at the Raider Classic tournament to finish fourth at the event.
The tournament, which took place on Jan. 13, is used by many teams to measure improvements made over the season and what still needs to be accomplished before the district meet.
This is the Atoms’ first time participating in the meet.
“The meet went pretty well, I think Annandale should continue to participate in the raider classic because it was a good experience and run very well,” said senior Uriel Sejas.
They finished behind Colgan, South Lakes, and Osbourn with 137 points. Most importantly though, they beat Jeb Stuart who placed sixth.
Each of the Atoms’ nine wrestlers placed top four in each of their respective weight class tournaments.
Uriel Sejas won the 120 weight class bracket. In each of their respective weight classes, Hugo Amaya placed fourth, Jonathan Ruiz placed fourth, Dylan Weaver placed second, Justin Scott place fourth, Patrick Lee won the 182 weight class bracket, Cesar Lopez placed third and Kevin Reyes placed second.
Senior Allen Kokilananda placed second in the 145 weight class.
He had one specific overall highlight of the tournament.
“For me, it was when Uriel Sejas and Patrick Lee won their brackets in the tournament, that was a highlight, ” Kokilananda said.
It has taken a lot of work and training in practice every day for the Atoms wrestling team to get to this point.
“Our conditioning has improved greatly thanks to Coach Klein’s practices,” Kokilananda said.
As the season comes to a close and district match ups inches closer and closer there are still many preparations and improvements that need to be made for a successful season.
“We still need to focus on improving on certain positions that we still remain to be weak in in order to get to our goal of winning our district match ups,” Kokilananda said.
The district tournament kicks off on Feb. 2 at Annandale against TC Williams, Mount Vernon, Hayfield, and West Potomac and continues until Feb. 3.
But, with the results of the Raider classic being finalized, the Atoms now have a decent idea of what their strengths are as a team, along with what they still need to improve upon and how they may do in the district tournament at home.
The confidence gained from AHS’s success in the tournament can give them the stamina that they need to build momentum as the district meet nears.
However, no teams from the Atoms’ district consisting of Mount Vernon, West Potomac, Hayfield and T.C. Williams competed in the tournament, so it is hard to tell how AHS is currently doing in their conference.
With all of this in mind, wrestling is preparing to host their last duel against Hayfield which will be their last meet until the district tournament.
This final meet will be important because it will give Annandale an idea on how they matchup against Hayfield who will be participating in districts.
The end of the season is on the horizon, and the senior leaders of this team will be looking to end their high school wrestling career on a high note by advancing far in the postseason.