Swimming finishes off season at regionals 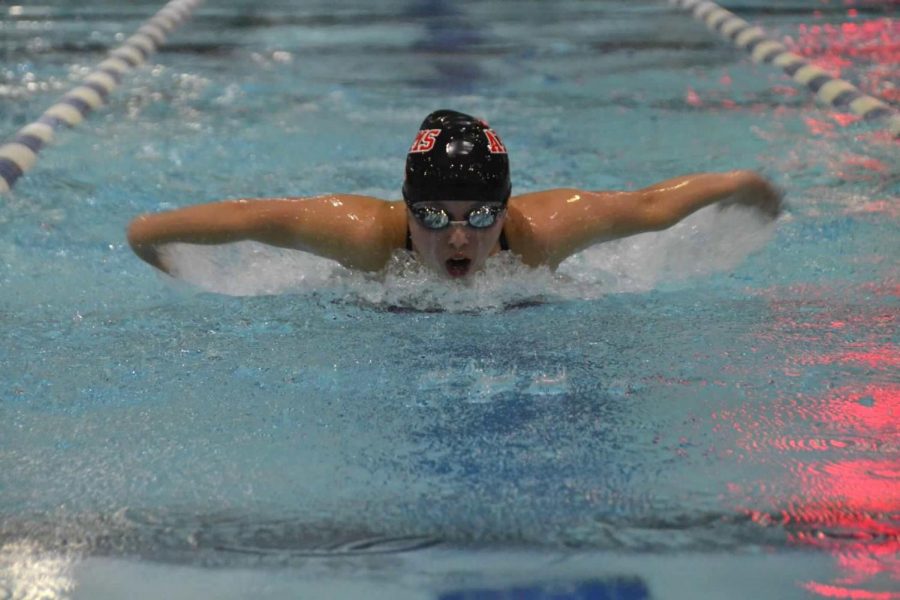 20 swimmers qualified for regionals, but none moved on to the next stage.
On Feb. 2 and 3, the swim and dive participated in the Occoquan regional championship against 17 other high schools from around the region at Charles J. Colgan HS.
Regionals occurred after districts the previous week, where the Atoms took fourth place in the Gunston district against West Potomac, T.C. Williams, Hayfield and Mount Vernon.
At districts, they had a combined score of 538 points, 352 of which came from the girls and 186 came from the boys.
“At the districts we did really well, I was proud of the way at the way they swam at the relays and got personal bests times, 20 of them moved on to regionals,” Coach Victoria Douglas said.
Many swimmers like junior Kayla Holcomb and senior Lennon Wuhrer had a successful season where they dropped a lot of time and both qualified for regionals.
“The team performed well at districts and regionals for beginning the season as a rather inexperienced team. A lot of the underclassman dropped time,” Holcomb said.
Both Wuhrer and Holcomb participated in the regional meet. Holcomb participated in the 100 free and the 200 free relay and Wuhrer swam in the 200 medley relay, 50 free, 100 fly and the 400 free relay. In total, the Atoms had 20 swimmers participate in regionals.
“During the season we have come together more as a team and swimmers have stepped up to the plate to give their best efforts at meets and practice,” Douglas said.
Before the regional meet however, there was a lot of preparation mentally and physically that had to be made in practice.
“People who were going to regionals came to swim practice and worked on getting the momentum down and working on cardio,” Douglas said.
Practices were the key to success, according to many of the swimmers.
“We’ve developed and improved through practices and tough workouts throughout the season with a mixture of focus on technique, speed, turns, and dives,” Holcomb said.
“These practices have helped many beginners on the team to develop more skill to have a successful season,” Wuhrer said.
“Additionally, the coaches have improved the benefit of practices by better tailoring sets to swimmers’ specific events where a whole body workout is achieved.”
The mindset of the team this year was set on improving whilst making sure that practices were not long and insufferable as well.
“The whole focus of swim this season was to have fun while improving strokes so that underclassman can improve while having fun with the sets created by coaches,” Wuhrer said.
Overall, the team looks to work hard, exercise, and build muscle in order to improve more and have another successful season next year.
“We’re excited to work with the kids and work on them being more of a team next year,” Douglas said.
“The team has come a long way since the start of the season and we are looking to have a very successful season next year due to the freshmen developing a lot of skill throughout the season,” Wuhrer said.
“I look to improve for next season by staying active with doing lacrosse in the spring, doing club swim in the summer, and running and lifting in the fall,” Holcomb said.
After finishing fourth in their inaugural season in the Gunston district, and also giving a decent showing at regionals, the Atoms will try to improve for next year.