AHS Atoms battle to 9- 2 victory against the Lee Lancers 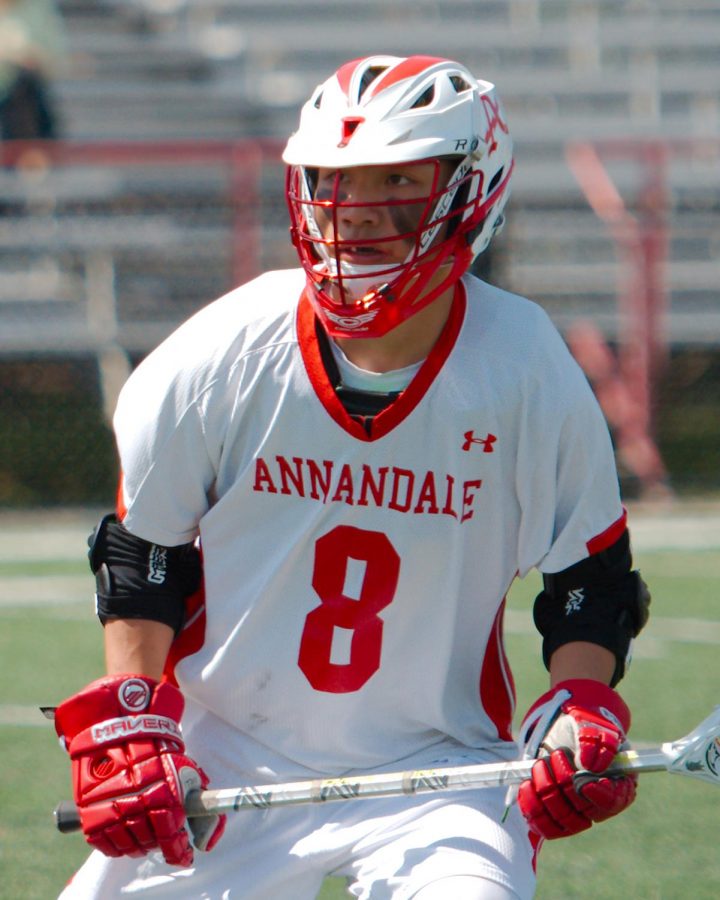 Junior Matthew Dinh runs with the ball in a game against Falls Church High School last year on April 10.

It was a decisive victory for the Atoms on Thurs. March 8, as they defeated the Lancers with a dominant scoreline of 9-2.
Junior Alex Bellem was a star performer in the Atoms final preparation for their season, as he bagged a team-best four goals.
Junior Cameron Foti secured a hat trick, and seniors Tyler Westfall and Jon Figley each grabbed a goal as well.
The victory against the Lancers comes after the Atoms were victorious in their first scrimmage against C.D. Hylton HS as well.
The Atoms dominated each of their scrimmages as they won against the C.D. Hylton Bulldogs 8-4.
“The past two scrimmages went really well,” Westfall said. “I think we got better from the first scrimmage to the second scrimmage so that’s a positive sign. Hopefully the trend continues and we continue to get better every game.”
The large margins of victory in each scrimmage for the Atoms is a sign of the success they hope will be coming in their season.
“I’m really excited for this upcoming season. It’s my first season, so I’m hoping to do really well. ” Westfall said.
Being a lacrosse rookie, Westfall wants to work on many facets of his game to focus on performing well during the season.
“For me as a first year player, I have a lot of stuff that I need to work on, but I’d say a big one is stick skills like shooting and passing accurately,” Westfall said.
After a 1-10 record in their previous season, there is a lot of room for improvement for the team as well.
As they begin their first season in the Gunston District, with Hayfield, Mount Vernon, T.C. Williams and West Potomac, they will be attempting to be the kings of their district.
Many on the team feel like this is an attainable goal for the Atoms.
“For the team, I’d say that we have a shot at districts, which would be pretty exciting if we pulled that off,” Westfall said. “But, we do need to improve some parts of our game.”
As they continue to train and prepare for their season opener, they will improve.
“The biggest thing we need to improve is communication both in the offensive and defensive zones. When we communicate well, we usually have success on both ends,” Westfall said.
Communication will be something that the squad will develop slowly but surely as they build up chemistry during practices and games.
The Atoms will be kicking off their season with a game against the Washington-Lee Generals on Thurs. March 15, and a victory for them would be crucial to starting the season on the right foot.
The team will be wary of being overconfident, especially after a 1-10 record in the previous season, but they feel like they have the tools to succeed this season.