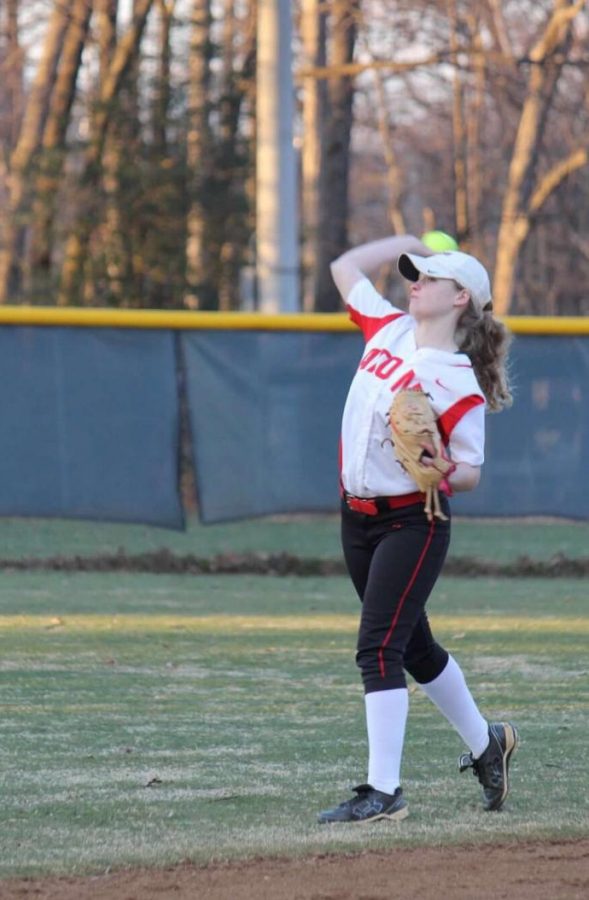 A flash snowstorm forced the softball’s team’s final game in the tournament against Oakton to be postponed until two weeks later on Fri. April 6, moved from the week before spring break,
The Atoms varsity softball finished up their final game in the tournament against Oakton.
Of the five total games they played in the Hayfield Spring Break Invitational Tournament, the Atoms were only able to win one of them, against Thomas Jefferson 1-0.
This tournament took place after their first two season games, where they routed both the Jeb Stuart Raiders and the Falls Church Jaguars by scores of 12-2 and 13-3 respectively.
Against Oakton however, the Atoms were not able to shake off the rust left over from spring break.
The team lost by a heartbreaking score of 18-2, thus adding to their losing streak making it a total of four in a row.
“The game was alright, but we did not get the result that we were hoping for,” senior Elizabeth Corcoran said. “Overall, we did a good job with making adjustments when playing multiple different teams during the tournament, however we did not execute many plays as we wanted to.”
After the conclusion of the tournament, the team now has a record of 3-5 overall, with district opponents on the schedule ahead.
Additionally, the Atoms will face off against W. T. Woodson, in what will be a tough game for them.
Annandale suffered defeats against Hayfield and Mt. Vernon during the tournament at Hayfield and will be seeking revenge.
Next, they will face Hayfield on Wed. April 18 and Tues. April 24 and Mt. Vernon on Fri. April 20 and Tues. May 8.
The Atoms’ game against Mount Vernon on May 8 will be their final regular season game before the district tournament.
“So far during the season, we are a much stronger team and have made some big improvements, but we still need to work better together as a team as opposed to everyone waiting for someone else to make a play,” Corcoran said.
Knowing this, the Atoms will be looking to improve in time to do well during the postseason.