Annandale Football: Can they Comeback? 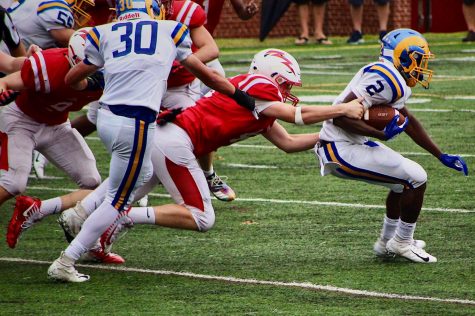 Annandale has lost the last 3 games. What kind of mental effect does that have on a team? Every week seems the same almost. There’s a lot of hype and then by the end of the 1st quarter you’re wondering why you showed up.

When they played Justice in their first game, they lost 47-26 . When Annandale played Woodson, they couldn’t even score a touchdown. They did however manage to get a safety in the 4th quarter making the score 39-2 Woodson. Against Robinson last week, they lost 58-21. So how are they going to rebound from losing their first 3 games and hopefully bounce back to beat Fairfax this Friday.

Injuries have laid somewhat of a factor on the team. Trea, a defensive player who was injured during warm-ups in one of the previous games, said that work needed to be done on the play calls saying. “Other teams know our plays like Red and Black and they’re calling them out before we can even run them,” Trea said. He also said they needed to start playing like brothers.

But Quarterback Devon Gill and was a little more enthusiastic about the team. “We have very beatable opponents over the next weeks and we’re just gonna press the reset button and work hard,” said Gill.

“Well every week we try to get better no matter what the outcome, it’s a week to week, day to day process, so I tell them to come Monday it’s a new season…hopefully you get more guys healthy that were banged up,” Coach Scott said. “Every single game there’s enthusiasm…we just need to find a way to win and unfortunately we haven’t found that yet”.

The next few weeks look promising for the Atoms. Fairfax has gone 2-2 in their first 4 games losing to 2 teams. Then they’re playing Washington-Lee who got shut out against Fairfax so a possible easy win there (That’s the homecoming game so you always want to win that one) and then they play Marshall and that’s one Annandale should beat based on Annandale wiping them out last year but Marshall is 2-1 and in those 2 wins they haven’t given up more than 10 points.

So if the injuries heal, the team starts working, and they start playing like a family. We might see the first Atom win this Friday.