Football outlasts Washington-Lee in a shootout 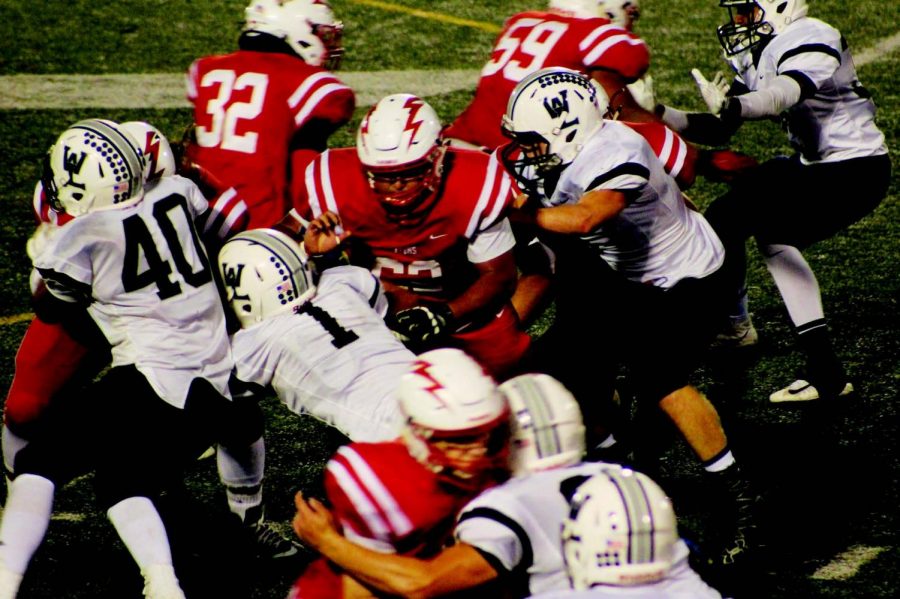 Junior offensive lineman, Brian Fuentes-Llanes (62) heads in for the block against Washington-Lee on Sept. 18

On Sept. 28, the AHS football team finally won their first game against the Washington-Lee Eagles by a score of 42-28.
This win came after four brutal, consecutive losses.

This first win also happened to be the homecoming game, which made it that much more special to the team.

“Overall, against Washington-Lee, we played as a team together and played great defense which got our offense rolling,” sophomore quarterback, Danny Salisbury said.

However, the journey to the win was rather rough as the team had to learn from some brutal losses.

When the Atoms played the Justice Wolves in their first game, they lost by a commanding score of 47-26.

Then, when the Atoms played the Woodson Cavaliers, a very dominant team so far this year, they were unable to score a touchdown.
They did, however, manage to get a safety in the fourth quarter making the score 39-2 favoring Woodson.

For their third game against Robinson on Sept. 8, the team lost 58-21

After a bye week, the Atoms lost again at home against Fairfax by only a touchdown, after suffering a one point loss last year.

The big question that the team was left with after suffering four losses was how were they going to rebound and pick up a win against a vulnerable Washington-Lee, who were also 0-4 at the time.

A big contributor to the team’s losses were injuries with AHS starters.

For example, senior Trea Allen, defensive player on the team, who was injured during warm-ups in one of the previous games, said, “work needed to be done on the play calls.”

He also brought up other flaws with the team’s play calling during the games.

“Other teams know our plays like Red and Black and they’re calling them out before we can even run them,” Allen said.He also noted that they needed to start playing like brothers, which was achieved in their huge two touchdown win against Washington-Lee.

Another factor which helped the Atoms achieve their win against the Generals was their mindset going into the homecoming game.
Quarterback Devin Gill remained enthusiastic about the team.

“We have very beatable opponents over the next weeks and we’re just going to press the reset button and work hard,” Gill said.

“Every week we try to get better no matter what the outcome. It’s a week to week, day to day process, so I tell them that come Monday it’s a new season. Hopefully, you get more guys healthy that were banged up,” Scott said.

Throughout the rest of their season, the Atoms will need to keep their positive mindset and confidence from a much needed win.

“Every single game, there’s enthusiasm. Overall, it’s just about finding the way to get the win,” Scott said.

After the win, the team also assessed changes that need to be made.

“Everybody, including me, needs to step up and play to their full potential,” Salisbury said.

Last Friday, they headed to Marshall High School to challenge the 3-2 Griffins, who also came off of a nail biting, double overtime win against Justice High School.

At the time of the publication of this story, they have not yet played.

“To prepare for the rest of our games this season, the team will be watching and reviewing film and replays 24/7,” Salisbury said.

However, the Atoms looked for vengeance after losing at home last year by a heartbreaking score of 41-40.

The team believes if injuries heal, they keep up their mental game, work hard and keep playing like brothers, they will be able to turn their season around.