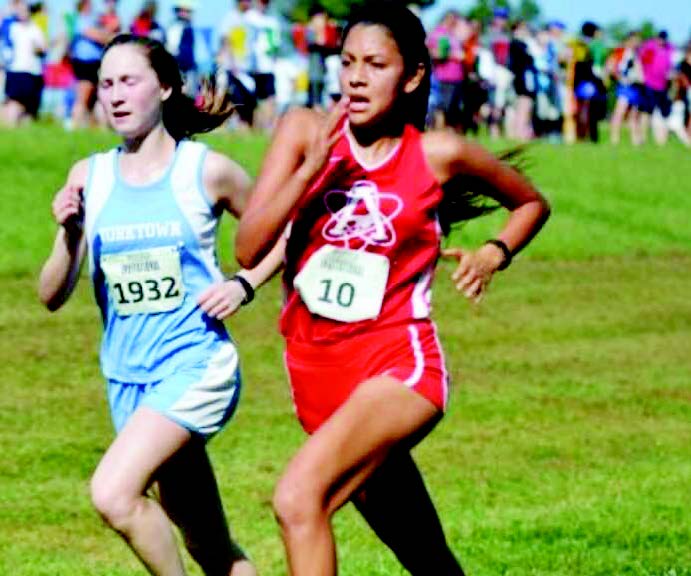 Senior Vitalina Fuentes sprints toward the finish line in a fierce duel against a Yorktown runner at a past Glory Days Invitational meet.

So far this season, girls cross country has only participated in two invitationals, excluding Glory Days.

The invitations that the team participated in were Monroe Parker and Great Meadow with the other scheduled invitationals being cancelled due to inclement weather.

Unfortunately for AHS, this means that girls cross country has not participated in an invitational meet since Monroe Parker on Sept. 8, almost a month before the Glory Days Invitational.

However, as expressed by coach Phil Harris, these cancellations have no impact on the team.

However, fortunately for the Atoms, both boys and girls cross country have been participating in multiple other scheduled weekday meets to remain at a competitive level. The meets are held against the four other teams in the Gunston District that they will face again in the district meet at Burke Lake Park.

In order of place last year in the district, they are West Potomac, T.C. Williams, Hayfield, Annandale and Mount Vernon.
Additionally, practices have been made harder due to the meet cancellations in preparation for difficult district and regional meets ahead.

“Right now, I am very happy about where the team stands because we are well ahead of schedule in our practices,” Harris said. “However, I would like to have the team work more on speed work such as 600 and 800 meter repeats on the track.”

Overall, the non-invitational, district meets will help AHS accurately gauge or get a feel for how they will perform in the actual meet which will take place on Oct. 25.

From this, they can see what adjustments or changes need to be made in practices leading up to the meet.

Additionally, the Atoms will have to finish top four in the district (out of five) in order to move on to the regional meet on Nov. 1.

Last year, the Atoms survived the district by placing fourth overall with a commanding lead over last place Mount Vernon.

At both the district and regional meets, the girls expect to have an advantage over many other teams as they have already run this course this season in the Monroe Parker Invitational.

They hope it will be enough of an advantage to get them to be successful in the district and possibly the regional meet to end their season.