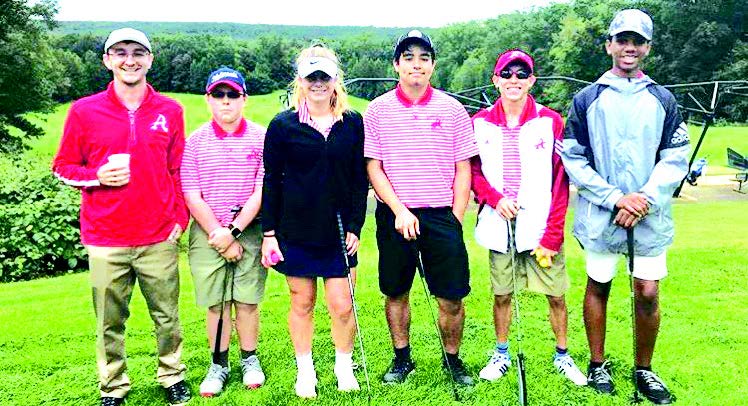 The AHS golf team has had a rough season. With no wins thus far, it was uncertain that they would win in Districts this past week.

The rainy weather at the Pohick Bay Golf Course, where the match was supposed to be held, caused for the District Tournament to be postponed from Sept. 24 and 25 to Sept. 27 and 28.

Even after the delay, poor conditions on the course still impacted the players both physically and mentally.

“The conditions on the course were so terrible,” freshman Kate Crestman said “It was very rainy and it made it hard to get crisp contact with the ball.”

The match was played on Sept. 27, even through the rain, but was canceled on Sept. 28 due to the atrocious quality of the course.

Unfortunately, the match will not be rescheduled due to the upcoming regional match, in which AHS and every other Gunston District team will participate.

“It started pouring halfway into the match and the course also got extremely muddy,” freshman Nicholas Lemens said.

Unfortunately for the Atoms, the team ended up coming in last place overall.
Additionally, regionals are coming up and going into it without a win will be a challenge for the team.

“We practice a lot at the Pineridge golf course and the Four Seasons range,” Crestman said. “Each practice we work hard to perfect our swing and it definitely helps us get better as a team.”

Although their results have been disappointing, it is very important to consider that the team has played some of the best golfers in the state and have still been able to remain competitive.

Furthermore, the team is comprised of mostly underclassmen who will gain a lot from their experiences under the stresses of the post-season.

So far, it has been a year of growth for the Atoms since they lost many talented seniors last year.

Unfortunately, many of the top players in the region are upperclassmen from other schools.

These are players that the Atoms’ younger team will have to face at Regionals.

Overall, AHS golf looks to practice and work hard to prepare for the regional meet later this month.