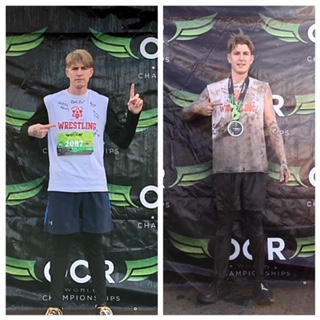 Carl Klein before and after the OCR Championships in London.

To qualify for the championships a racer has to go through smaller obstacle course races. Some of these races are Tough Mudder, Spartan Race, Warrior Dash and hundreds more. Klein qualified through Spartan Race. To qualify, he went to Nationals Park and placed top 20 for his age division in the elite class. There are also certain specifications one must meet to qualify.

During the OCR Championships, Klein had to go through nine and a half miles and 100 obstacles. Some of the obstacles were carrying a 100 pound sandbag for three quarters of a mile while going over and under hurdles, climbing on monkey bars over a 30 yard man made lake, and climbing underneath large staircases.

“I felt really good during the race.” Klein said. “There were times when I would come up to difficult obstacles, and I would have blank out any pain to get through it”

Klein has been participating in these races since 2015. He placed 42nd in his age division and 289th out of all males. There were over a thousand men competing.

Most of the competitors wear their country’s jersey as they race. However, Klein wore his AHS wrestling jersey. The racers started off clean, sparkly, and spotless. Yet they finished the race caked with mud and their jerseys could not even be seen.

There were no breaks during the race. Klein ran continuously for three hours and 13 minutes. He stayed in excellent shape as the race got closer, so he could keep his endurance up. The amount of work he put into this race is incredible.

“I’m glad that I qualified for world championships the year it was in London,” Klein said. “The people were super nice and friendly. The weather was perfect for running and the food was amazing.”

The race went through farmland and forest.

These races take a ridiculous amount of effort and skill. They are amazing to watch, so check them out the next time they come to town.