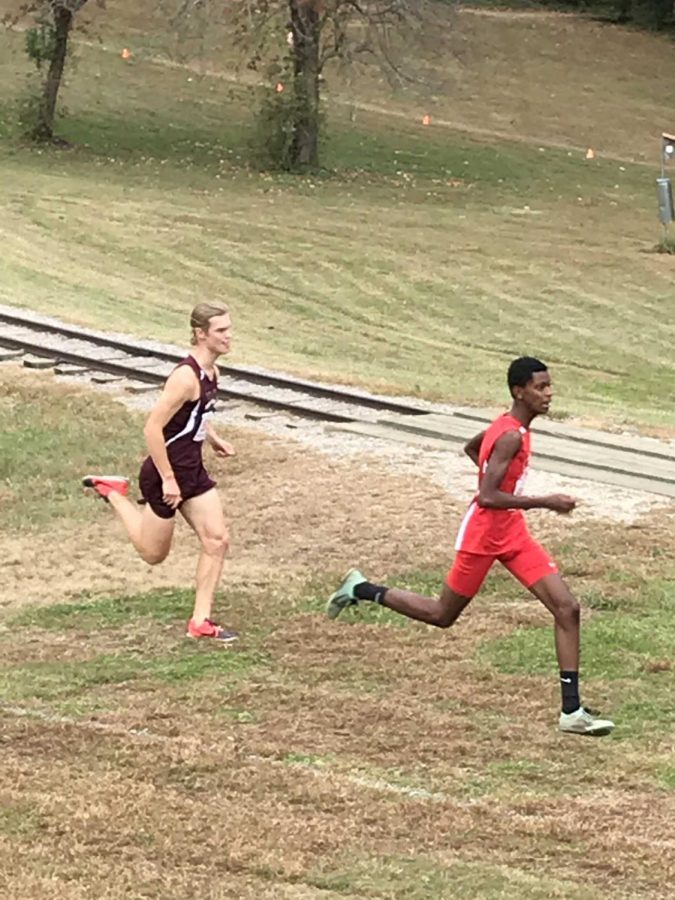 Junior Mikyas Sahlu kicks away from Mount Vernon’s senior runner, Hunter Fowlie, during the end of the race to win the Gunston District Championship.

After the Gunston district finals at Burke Lake Park, cross country, on both the boys and girls side, moved onto the Occoquan Region 6A finals.

Overall, the Atoms were successful in districts as the boys placed first in the district and the girls advanced after placing fourth above Mount Vernon.

The highlights of the district finals include a first place finish for AHS in both the boys and girls races.

“In order to qualify for the regional meet, the girls had to improve their average time [the average time among the first five finishers on the team] by about forty seconds and we did just that,” coach Phil Harris said.

Overall though, the skill levels of each team for both the boys and girls side should have been no surprise to AHS as the Atoms had faced them in multiple in-district meets and some invitationals.

For example, all Gunston district teams participated in the Monroe Parker Invitational, which took place on the same course that was run for both the district and the regional finals.

From the district meet, the Atoms noted all improvements that needed to be made before regionals which was held under almost identical conditions with many of the same teams.

The districts that participated in the meet are the Gunston, Patriot, Cardinal and National districts. The results of the regional meet are as follows.

Unfortunately, neither team qualified for state in which a third place or better finish was needed.

“The Atoms did alright in the regional meet, better than last year. But, we still could have made some further improvements,” Harris said.

However, the top five times for each the boys and girls races are permitted to the state meet, which was held on Nov. 9 in The Plains, to compete individually.

Due to their stellar performances and finishing times at the regional meet, the Atoms had two individuals, Mikyas Sahlu and Julia Ghiselli move on to states.

“I felt positive about the future performance of Mikyas and Julia at the state meet. However, I predicted Mikyas to finish top ten and Julia to finish top five in their events,” Harris said.

“Overall, most of AHS closed off the season on a good note. I believe that we put in a lot of great work, achieved our goals, and will look to improve even more before track season,” Harris said.

From cross country, the Atoms will have to shift gears to head right into indoor track season.

They will have to train for their first meet against T.C. Williams, Edison, Robinson, Marshall, Chantilly, and Herndon at Episcopal High School on Dec. 12.

“Based on our success during our cross country season, I feel confident about the team this [indoor track] season, however, we should increase speed training,” Harris said.