Strong defensive performance clinches a victory for the Atoms 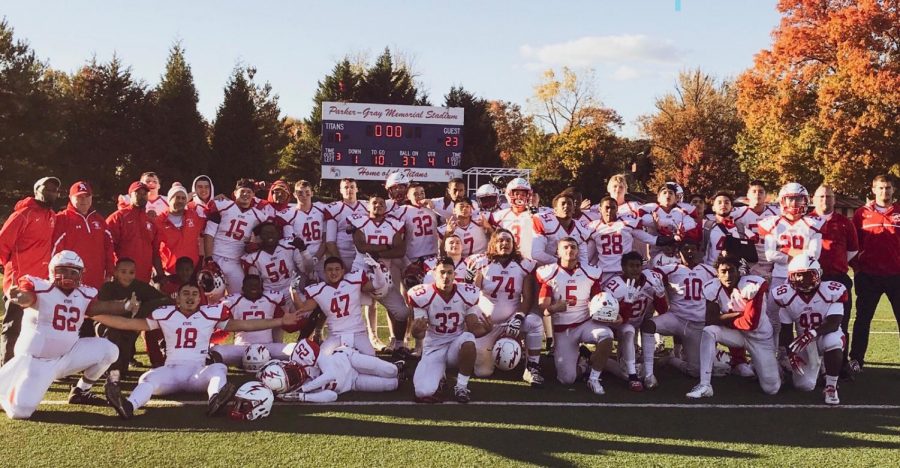 The Atoms pose for a picture to celebrate a dominant 23-7 win against T.C. Williams and successful season where they finished second in the Gunston District.

For their final conference and regular season game, the AHS varsity football headed to T.C. Williams to challenge the 4-5 Titans on Nov. 3.

The Atoms played with dominance defensively as they held the Titans to only seven points and forced multiple turnovers.

The final score was 23-7 favoring the Atoms, who rallied to score their 23 unanswered points after trailing by seven.

Both teams finished their seasons with records of 4-6.

The Atoms dominated the Titans, whose only score was off of an AHS mistake on the opening kickoff.

“T.C. Williams elected to kick into the wind for the first half kickoff and one of our guys on the second line went in to block and didn’t field the ball,” head coach Mike Scott said. “So, they recovered the ball and eventually drove it in for a touchdown.”

Fortunately for the Atoms, the opening kickoff mistake which led to a touchdown was the Titans’ only points of the day.

After the error, AHS seemed to learn from their mistake and dominated the game thereafter.

Overall, it was a great game on the team’s part when it came to turnovers, which have paid the price for earlier in the season.

T.C. had noticeably more turnovers, which fed into the Atoms’ successful performance.

The Atoms’ only loss in the conference came the week before when they were routed by the Hayfield Hawks by a score of 14-53 on Oct. 25.

“In order to finish the season off on a win at T.C., our guys came back after the disappointing loss to Hayfield and kept working to get better every day,” Scott said.

The win at T.C. Williams was a great note to end the season on, but unfortunately, the Atoms did not advance out of their region to the 6A State Championship Tournament.

In fact, only two out of the five teams advanced out of the Gunston district. They are the Mount Vernon Majors and the Hayfield Hawks.

The two teams are set to play each other in the first round of the tournament.

Nonetheless, it has been a great season of pure improvement as expressed by Scott.

“We had a great season this year,” Scott said. “Overall, we have gotten a lot better, especially our younger players who have made great strides so far.”

This improvement can be shown in the team’s schedule this year. They started the season off by losing their first four games against Justice, Woodson, Robinson, and Fairfax. Then, they bounced back to win four of their last six games, including their recent win against T.C.

“Even though we were not going to advance out of our district, we still wanted to get out and win on the road by having a good week of practice,” Scott said.

Despite not finishing first in the district or moving on to the state tournament, AHS has still had a great season and their talent will only improve next season.