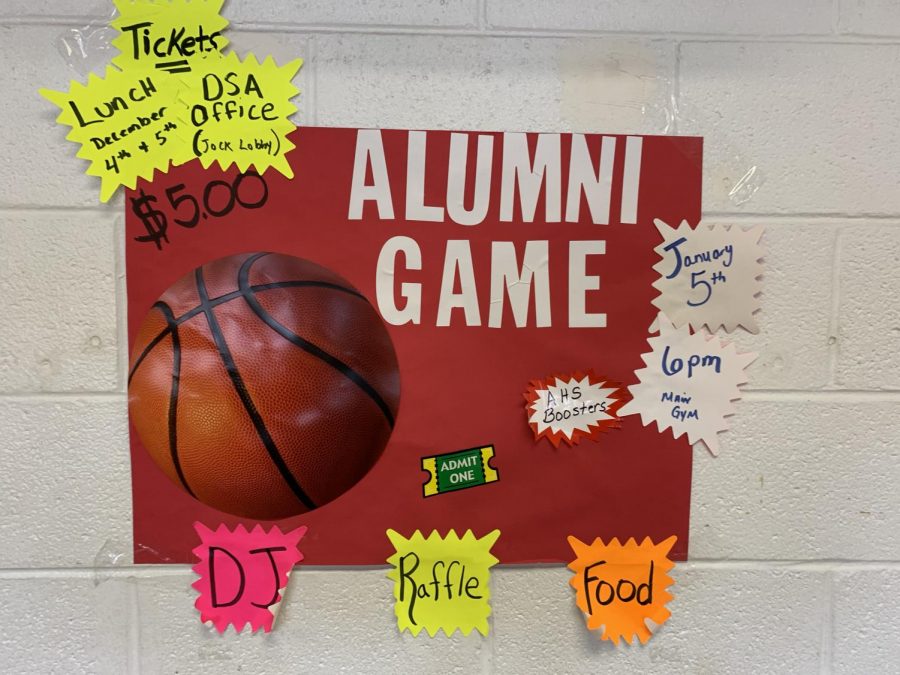 Information about the event is posted throughout the school.

An announcement for the newly established annual alumni basketball game has been made by the AHS athletics department and boosters club.

The goal of the games will be to raise money for the boys and girls AHS basketball teams.

The teams will consist of five basketball players each that have graduated from AHS in the past.

Each player registered paid a $5 fee in order to play. Additionally, tickets will cost $5 each.

All equipment such as jerseys and basketballs will be provided to the players given the $5 fee.

However, there will be two sets of games, one for the older and another for the younger generation of alumni.

Then, each player was put onto random teams with teammates around the same age.

The announcement about the decision of team compositions from the draft will be made via the AHS athletics twitter in the weeks leading up to the event.

By the publication date of this article, the teams have not yet been decided.

Coaches for the teams of alumni include: Amy Lipicky, Patrick Hughes and Ramano.

Three time-outs can be taken by each team during the course of the game.

Inspiration for the fundraiser came from girls basketball coach Fawn Tucker who brought the idea from Alabama where it was a success in the past to AHS student activities director, John Ellenberger.

“The goal is to raise money for the basketball programs to buy shoes, sweats, and other equipment we need,” boys varsity basketball coach Deidrich Gilreath said.

Instructional Assistant Mohamed Khalid will be the DJ throughout the game with a performance from the dance team at halftime.

“I am unsure of what to expect from this new fundraiser or how successful it will be,” Gilreath said.

Overall, it is expected to be a fun way to give students the opportunity to come out and support both AHS basketball programs and the athletics department.