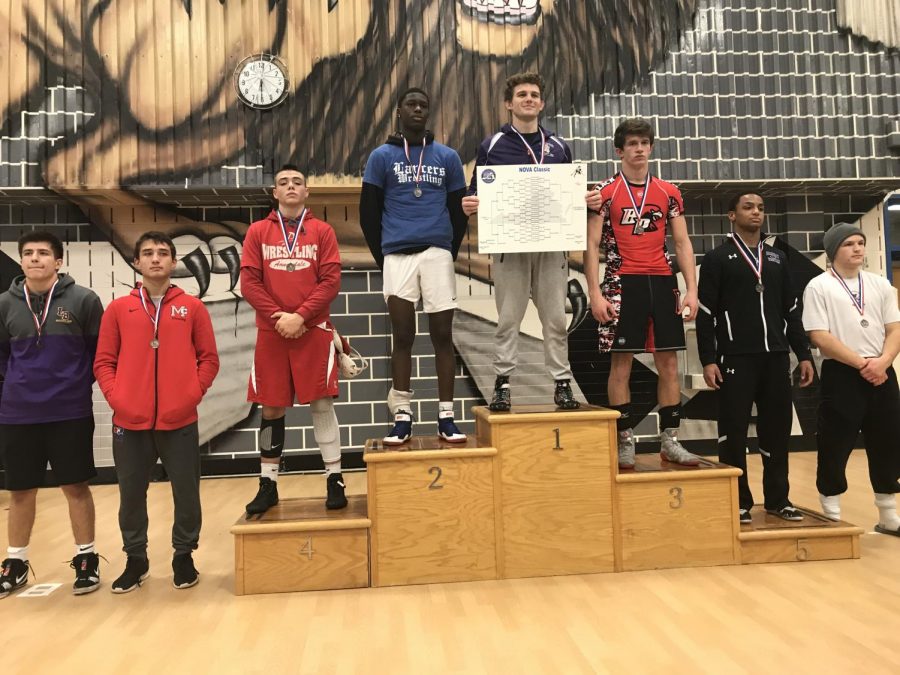 Junior Dylan Weaver steps up to the podium to celebrate his fourth place finish in his weight class bracket of 170 at the NOVA Classic tournament. His elimination in the semi-final came on Dec. 8 in a bracket featuring 32 total wrestlers.

To begin the varsity season, Atoms wrestling headed to Washington-Lee to test where exactly the team is at so far in terms of improvement.

The result of the match was a heartbreaking 29-39 loss for the Atoms, but it was only the first of many matches to come this season.
Nevertheless, the match was a close one that could have easily resulted differently, as expressed by coach Joshua Damico.

“There were three matches in total in which we lost by four points or less which were close and could have gone the other way,” Damico said.

If those matches had resulted differently, the Atoms could have left Washington-Lee with their first win.

“[For the dual on Dec. 4] my expectations for the meet were to just go out and wrestle as best we could and we did for the most part,” Damico said.

Despite the loss, the team got the opportunity to wrestle together for the first time this season and still put up a respectable effort.

“With all things considered, the team performed well. Also, we were able to be part of a new trend by getting to wrestle on the auditorium stage at Washington-Lee,” coach Damico said.

“This caused for a bit of stage fright.”

Additionally, success was seen in the match as many AHS weight classes claimed victory.

“Those who won include: Breanna Sanchez, Philip Barlow (who won by a forfeit), Michael Mendez and Kalunga Nseka pinned their opponents, and Dylan Weaver tech falled his opponent,” Damico said.

The Atoms then had to rebound from the loss at Washington-Lee to head to the NOVA classic invitational tournament at Fairfax.

However, Atoms wrestling’s improvement since the start of the season has been a significant force to be reckoned with.

Especially through their tough conditioning training.

“Conditioning is our strongest suit. Coach [Carl] Klein does a fantastic job getting these kids into shape with his workouts before they come to me for technique,” Damico said. “I haven’t seen these kids tired in scrimmages or a match yet.”

Obviously, this suit of skill is something that should benefit AHS going into a tournament as large as the NOVA classic.

Last year in the same tournament, AHS placed sixth out of 32 teams with a score of 56 points.

“I was looking forward to the tournament this weekend despite only having our first match three days prior,” Damico said.

However, this year resulted a bit differently as AHS as they placed 27 out of 32 with a score of 52.

Some of the highlights in the meet include a fourth place finish by Dylan Weaver and Patrick Lee in a tournament of 32 and 30 total wrestlers respectively.

Although AHS’ performance looks better on paper last year, these two meets are too small of a sample size for how the rest of the season and postseason will turn out.

“There were both positive and negative things that I saw in the matches, but everyone is working hard in practice, so I think our goal is attainable,” coach Damico said.

From the loss, the team had to shift gears to preparations for the next match that they hosted against Lake Braddock and C.D. Hylton on Dec. 12 at 6 p.m.

By the time of the publication of this story, the match had not yet taken place.

The next invitational tournament will be the cavalier classic which will be located at Woodson on Dec. 15.

For this tournament, the Atoms will continue to prepare like normal and put in the effort in hopes to produce significant results.