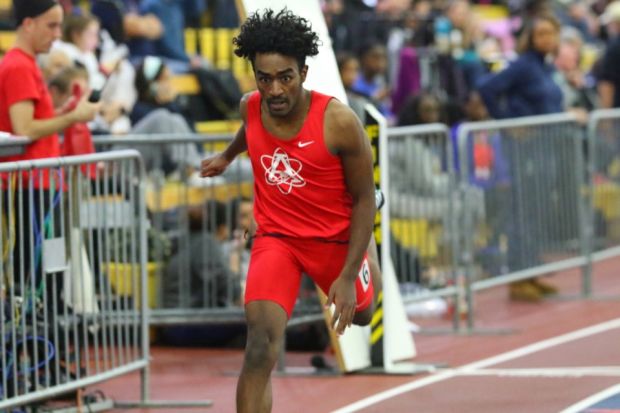 Senior Ayman Elhag races the 300 meter dash during the Montgomery Invitational on Jan. 12 where he qualified for states and placed second with a time of 36.30. He also ran the 4x200 meter relay where they placed third with a time of 1:33.77.

Following a success at the Montgomery Invitational on Jan. 12, AHS indoor track prepared for their next and final invitational before postseason, the Winter Jacket Classic.

However, the Winter Jacket Classic was cancelled the day before the meet was to take place due to the cold weather making performance ineffective.

Some of the highlights from the Montgomery Invitational include a third place finish by the boys 4×200 meter relay out of the 53 total teams present at the meet. They earned a time of 1:33.77.

Additionally, senior Ayman Elhag placed second in the 300 meter dash finals with a time of 36.30 seconds. This qualified him for the VHSL state championship, which will take place later next month.

“At Montgomery, we accomplished a lot and I am happy with the team’s performance,” coach Phil Harris said.

The Winter Jacket Classic would have marked the end of AHS indoor track’s rather short regular season. Since the DCIAA Invitational on Dec. 1, there have only been four total meets, two of which have been invitationals.

Now, instead of competing in the Invitational, the team will have to head directly into districts after only participating in three invitationals.

“Due to the harsh, cold weather, we planned to only take the girls and boys 4×200 relays who are trying to qualify for regionals and states,” Harris said.

Last year, during this same meet, the team found success as they placed ninth overall out of the 23 total participating teams and tied with Thomas Jefferson High School.

At this meet, just like the Montgomery Invitational, many of the relays found success. Both the boys and girls 4×200 and 4×800 placed in the top 10 out of every team participating in the meet.

This year, there were no other teams from AHS’ district that are set to compete in the Winter Jacket Classic, so it would have been hard to tell how the team will perform in the district championships.

“Before the district meet, the team really needs to get out for more workouts, like ladder workouts that we missed,” Harris said.

With the cancellation of the meet, the team will have more time to be able to do just that.

If all goes as planned, the Atoms will be off to a successful postseason where they will advance to regionals and hop hopefully states.

“I think that we have a great shot at success in the district meet as we have a lot of talented sprinters who will win their events,” Harris said.