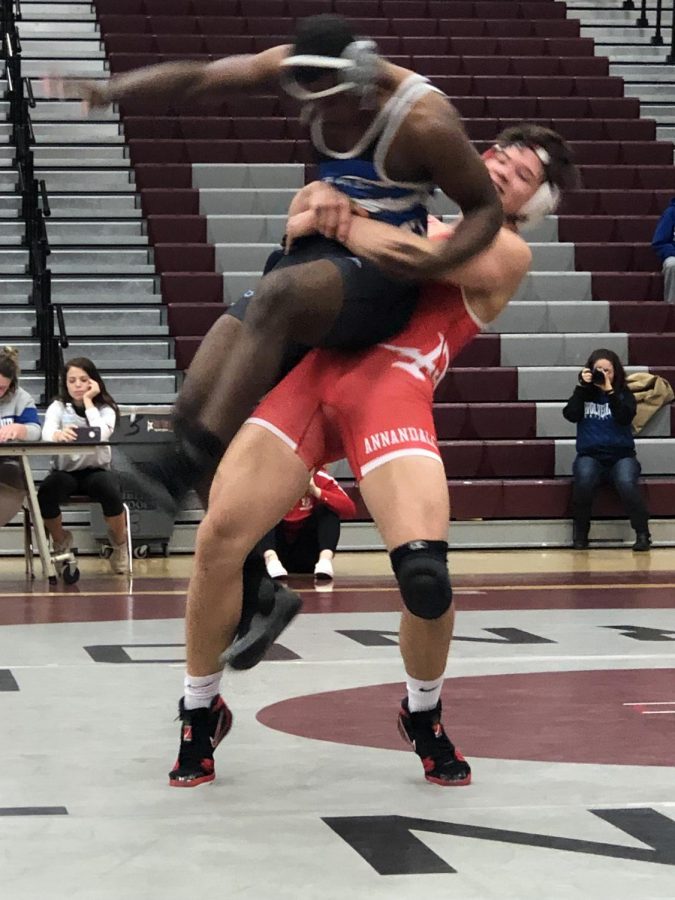 Junior Patrick Lee takes down an opponent during a district tournament at Mount Vernon High School on Jan. 16. The tournament was the second between all teams in the Gunston District and the last before the district finals.

Following their first invitational tournament of the season, the NOVA classic tournament, AHS wrestling has had an action packed season featuring many accomplishments along the way.

For their first home meet, they hosted C.D. Hylton and Lake Braddock for a tri meet. The Atoms lost to Lake Braddock by an overall score of 41-27, however, AHS won four of the eight individual matches.

Against, C.D. Hylton on the other hand, AHS lost by an overall score of 52-30 and won only three of the eight individual matches.

Then for their second invitational tournament, AHS headed to Woodson to participate in the Cavalier classic, where they placed ninth overall. Those who placed in that tournament for AHS include junior Dylan Weaver (first for 170 weight class) and junior Patrick Lee (third for 182 weight class).

AHS found success again when they headed to Langley High School for the Saxon Invitational tournament on Dec. 22. There, they placed eighth and beat both T.C. Williams and Mount Vernon, who they will soon face for the district tournament.

At the Battle at the Bridge Invitational on Dec. 28, the team placed 26th and were successful in many of their matches.

At their final invitational match of the season, varsity wrestling headed to to Chantilly High School to compete in the Joe Verciglio Memorial Tournament.

During that meet, the team placed 26th despite not having as many wrestlers as usual, however, two wrestlers again placed in their respective brackets. Lee placed third and senior Kevin Reyes placed seventh in the 285 weight class.

“[This year in practice], the team has improved on technique and confidence in the moves that they have been practicing in the practice room and translating them out onto the mat,” coach Joshua Damico said.

During practices recently, the team has been going over different specific moves and situations that will best help them to be successful in the postseason.

“[For postseason], we will keep practicing throughout the weeks to come to go over certain situations that are specific to the postseason and making sure that everyone is ready to go for the tournaments mentally and physically,” Damico said.

The next events for wrestling include a match at Fairfax on Jan. 22 and Pack the Pit, which is the equivalent of senior night, on Jan. 23.

Again, in both of these meets, the team won many of their matches and looked strong heading into the postseason tournaments.

Additionally, the team has laid out specific accomplishments that will mark their season successful.

“Hopefully we can repeat our district title this year and if not, we are trying to get as many wrestlers as possible into the district tournament and getting as many as possible to move on to the state tournament.”

But, whatever happens during districts, regionals, and likely states, the team has seen some serious improvement.

“[Right now], we are much better in terms of technique than we were at the beginning of the season,” Damico said.