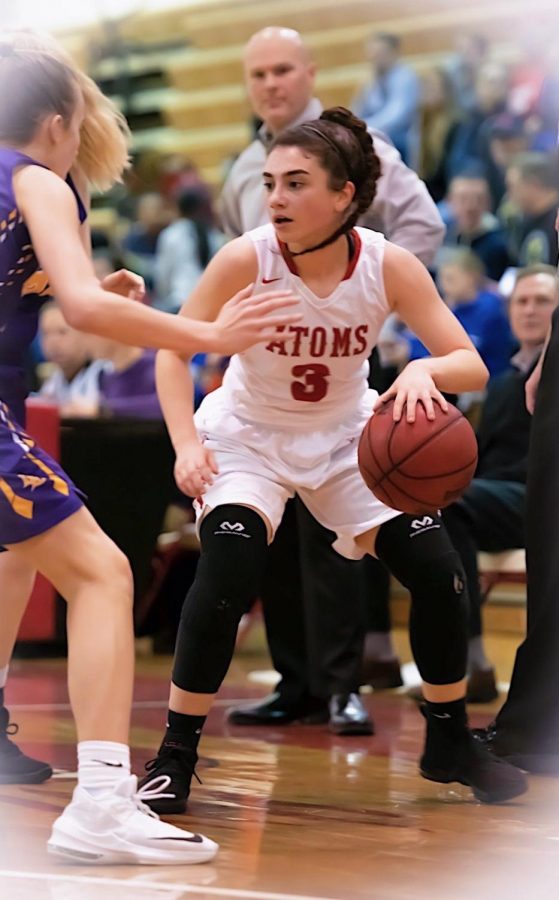 Shamdeen prepares to dribble past an opponent.

After picking up a narrow three point home win (53-50) against West Potomac on Senior Night, the Lady Atoms’ season hit yet another milestone in their action packed season on Feb. 5.

The Atoms picked up another crucial win against a Gunston District team that would impact their seeding in the District Tournament.

She scored 24 points that game, one of her best performances this season.

Additionally, Shamdeen is only one of fewer than ten Atoms to achieve the accomplishment, either on the boys or girls side.

“The last person do to so [score 1,000]points for AHS] was Dontae Johnson during my freshman year,” Shamdeen said.

Over the past four years that she has played for AHS, Shamdeen has remained consistent in scoring in order to reach this goal, which is extremely difficult to do.

Each season she played, Shamdeen has scored more than 100 points.

Her highest scoring season was her Sophomore year with 365 total, which is an average of more than 17 points per game.

“To me, it is very cool that I achieved this feat because I was doubtful that I would reach the 1,000 point mark this year,” Shamdeen said.

After reaching this astonishing goal, the team went on to the District Tournament just one week later to cruise past Mount Vernon by a score of 58-46, where Shamdeen scored a whopping 23 points.

“As a player this season, I have improved a lot [not just physically and technically, but] mentally as I no longer beat myself up after making mistakes during our games this season,” Shamdeen said.

Nevertheless, the team, and Shamdeen especially, had an accomplished season.

Following the win against West Potomac, Shamdeen surpassed 300 points on the season and had 1,022 career points.

Shamdeen also expressed that scoring 1,000 points is not the only accomplishment that came out of playing for the Lady Atoms for four years.

“The best part about playing basketball for my school is the bond that we have formed as a team throughout the years,” Shamdeen said.

The Lady Atoms then went on after senior night and cruising past Mount Vernon to fall in the district semifinal to the top seeded T.C. Williams by a score of 50-68.

The girls will head to their first regional tournament match on March 9.

In the future, Shamdeen plans to move on to play more basketball in college.

“I plan on playing in college and hopefully it works out,” Shamdeen said.