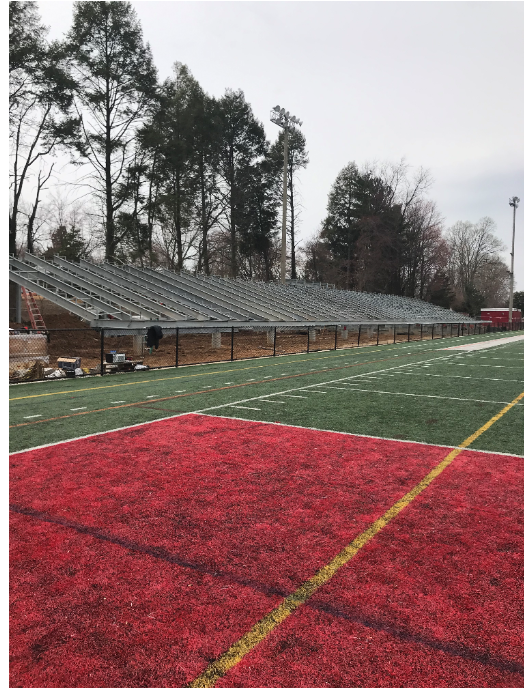 The bleachers are currently being built within Bolding Stadium.

Earlier in the year, it was believed that the bleachers located on the home side of Bolding Stadium would not be completed until after the spring sports season. However, the bleachers are on track to be finished earlier than once thought.
Over the past few days, the construction team has made a lot of progress.
“It might be done a little bit sooner than we thought,” Director of Student Services John Ellenberger said. “But I have not gotten the official word from the county.”
It is possible that the bleachers will be done before the spring season is over. The seating for the new bleachers will be reduced, but not by much. Ellenberger also asked the county to increase the amount of space between the bleachers and the fence surrounding the football field.
“I asked [the county] to give us another foot of space for the walkway. With that extra room, we might lose one more row of seating, but I don’t think that will really have an impact,” Ellenberger said.
The press box will also be upgraded with a possibility of heat and AC.
In addition to the renovated bleachers, upgraded restrooms will also be installed. Ellenberger received an e-mail from the county stating that AHS would be getting outdoor restrooms for the stadium. According to Fairfax County government code, there has to be a certain amount of outdoor bathrooms to the seating capacity.
As of now, Ellenberger has not received any word of what the bathrooms will look like or where exactly they will be.
As the renovations progress, it will become more apparent when the construction team will be done. The bleachers will be complete for the fall season with minimal loss to the size.