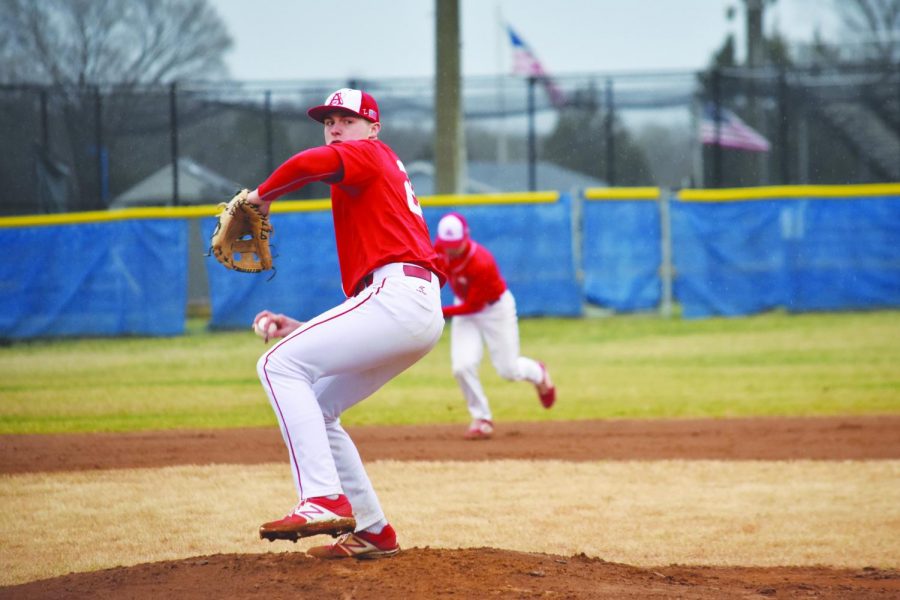 Sophomore Danny Salisbury pitches against West Potomac during their April 2 game. AHS lost 0-4 against the Wolverines (4-2) but kept a 4 inning clean sheet.

After proving to have a successful season last year and winning by a whopping 22-3 in the regional quarterfinal, AHS baseball headed to prepare for a new season.

So far, injuries have caused a rough start to the season as the team lost all of their first six games against Herndon, Langley, Justice, Washington-Lee, Thomas Jefferson, and a game in the Atomic Icebreaker tournament.

However, since these tough losses, AHS has started to gain back some confidence and momentum.

They won both of their next two games against Robert E. Lee High School and Park View High School 11-10 and 8-1.

“So far this year, we have proven to be able to improve and progress by continuing to improve our game and limit the amount of mistake we make on the field,” senior Alex Brennan said.

Then, before their spring break tournament in North Carolina, which will take place on April 15-17, the team will take on each of the other four teams in the Gunston District.

The only game that had been played by the publication date of this article from these four matchups was against West Potomac.

Unfortunately, the team lost to the Wolverines 0-4.

AHS held up against the Wolverines fairly well until the fourth and fifth innings where two runs in each inning were conceded.

However, the results of the games against T.C. Williams, Mount Vernon, and Hayfeld were unavailable by the publication date of this article.

After the spring break tournament, the team will play a series of five games against West Potomac, T.C. Williams, Woodson, Mount Vernon, and Hayfield before heading into postseason.

“Our toughest opponent this season will be West Potomac, but if we do what we need to I think we will stand a good chance,” Brennan.

The games against Mount Vernon, Hayfield, T.C. Williams, and West Potomac will serve as good indicators of how well the Atoms are likely to perform in the district tournament which starts on May 10.

“The team’s overall goal this season is to finish top in the district and hopefully make a good run at regionals,” Brennan said.