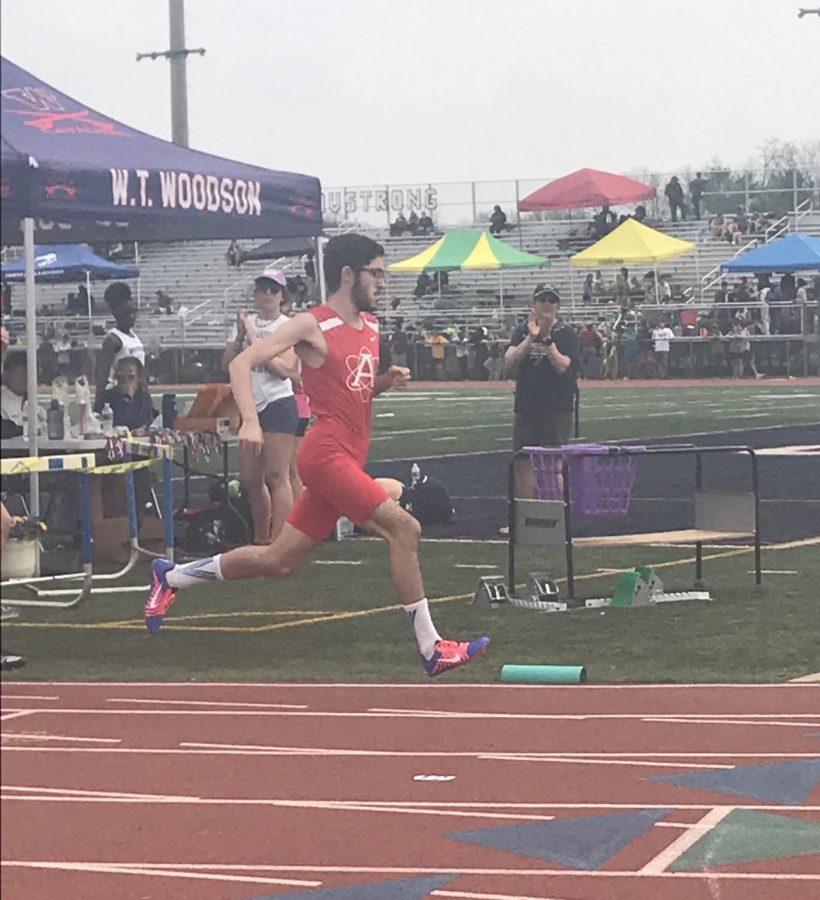 Sophomore Mousa Ayoub races the 1600 meter run where he placed first in his heat and 11th overall with a time of 4:56.

After both advancing to the VHSL State Indoor Track and Field Championships and placing 34th as a team and getting a sprinter to qualify for Nationals, AHS track heads into a new outdoor season.

Their first invitational meet took place at Woodson High School and was the Carolyn Legard Relays.

However, some events are exceptions to this such as the freshmen/sophomore 1600 meter race.

Overall, despite being only the first varsity meet of the season, AHS proved to be successful.

On the girls side, AHS placed 24th out of 32 teams with a total of 5 points scored.

On the boys side, the team placed 21st out of 31 total competing teams with 10 points scored.

Top ten finishes for the boys include a 3rd place finish by the 800 meter sprint medley relay with a time of 2:02.21.

In comparison to the performance of other teams in AHS’ district, the team did well even though there is still room for improvement.

At this point, the results of the first invitational could indicate improvement since last season where the teams placed third and fourth in the district for the boys and girls respectively.

The meet occurred just a week after the Carolyn Legard Relays and took place at James Robinson High School on April 5-6.

The results of this meet are unavailable by the time this article was published as it had not yet taken place.

The meet features a competition between 30 overall teams from all around Virginia, Maryland, North Carolina, New York, Delaware, and New Jersey.

Additionally, the meet served as a benchmark for how much improvement AHS has made in comparison to other teams in their district. This is because every other team in the district competed in the meet.

“So far, the team has been working very hard in practice in terms of endurance and speed workouts which was reflected in their performance,” Harris said.

In addition to the plentiful amount of invtationals that the team has and will be competing in, there are weekday, in-district meets that the team competes in as well.

These meets can help determine the improvements that AHS needs to make leading up to the district finals on May 16.

“Up until postseason, we plan keep doing hard workouts, except we will make them more difficult with less rest,” Harris said.

Although the season is still early, with postseason set to take place in more than a month, the Atoms will undoubtedly have a lot to be excited for in this action packed season.