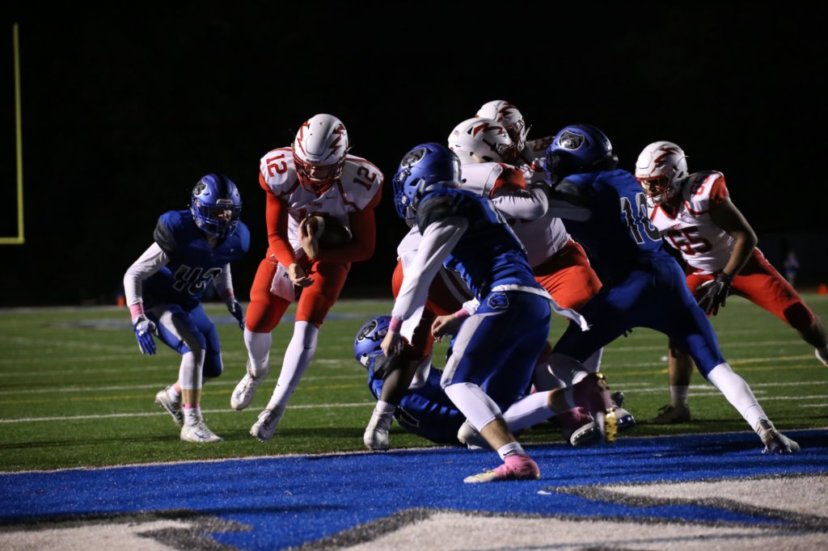 The abnormal school year is finally closing in on football season and players express their thoughts on the deviated plans and procedures they are used to.

Certain players have some concern for the dangers of pushing on with the season despite Covid-19 still being a prominent issue. “I feel like the push back of the season was smart, at first,” junior Zack Hurd said, “but until everyone gets a vaccination, no one is guaranteed to be okay.”

Due to football being a known contact sport, there is uneasiness with the rules placed for the season. “I think some of the rules they [are] inputting aren’t the best, knowing that at the end of the day we’ll be tackling each other and that just cancels out the part of us having to wear masks and what not,” junior Zaid Said said.

During the fall, a handful of football players participated in a seven on seven league. “The seven on seven was helpful because it gave me a glimpse of what playing during football season at school would be like,” senior Andy Zepeda said.

The tournament was held at The Saint James and there were several rules in place to ensure everyone’s safety. Among arriving, spectators had to complete a health waiver asking general questions regarding Covid-19. This helped the players with preparing for their football season.

Many student athletes, including football players, have taken a fair amount of precautions to keep themselves safe and healthy. There has been an ongoing concern from several people that players may not be doing what they can do to make sure that they are staying entirely safe; however, the team is trying their best to keep everyone safe. “Personally, I’ve been trying to distance myself [as well as] carry around hand sanitizer with me or clean stuff I touch on the daily more often,” Said said.

With several players being year-round athletes, they’ve experienced the new set of rules that has been placed for every sport season.. “For basketball, we have to wear masks during the game,” Salisbury said. “During the summer we tried to stay six feet apart as much as we could.” Although it is different from what we are all used to, players understand the restrictions are necessary

Many student athletes have to continue working during the pandemic which can be another struggle among everything else going on this year. “It’s hard for me to stay home because I have a job,” Hurd said, “I’m listed as an essential worker so I’ll be getting vaccinated within a few weeks.”

Although some players are concerned, others are staying hopeful that the season will run smoothly. Coaches and staff are taking all the necessary precautions to ensure everyone’s safety. “I heard that the helmets that we are going to use have a built in mask,” Zepeda said. “I feel like this is going to take us the extra mile in regards to safety since football is a contact sport.”

The pandemic has made it difficult for players to be able to prepare for the season in more familiar ways. As it is important for athletes to stay in shape, they have been doing all they can to make sure they are ready for the upcoming football season. While the gym isn’t ideally where you would want to spend your time during a pandemic, those who do go make sure they are taking the extra precautions.

“I try to go to the gym during the times that aren’t too busy but when I start my workout I am always sure to clean anything I use both before and after,” Zepeda said. “I always try to go the extra mile with being clean at the gym so that I am not putting anyone at home or on the team in danger.”

With the shortened season, the football team only has six games rather than their usual ten in order to make sure they are keeping everything fair and organized.

“I’m disappointed we won’t get as many opportunities to show our improvement over the past year and everyone’s at a disadvantage with the last of preparation,” said Hurd, “but in the end, it’s so we can get every season in everyone gets a shot at their sport, so it’s fair.”

The first day of official practice, for both varsity and junior varsity, will be held on Thursday, February 4th at 4pm. The Varsity football team will be holding their first football game on Monday February 22 against the Woodson Cavaliers, rather than their typical Friday night game.