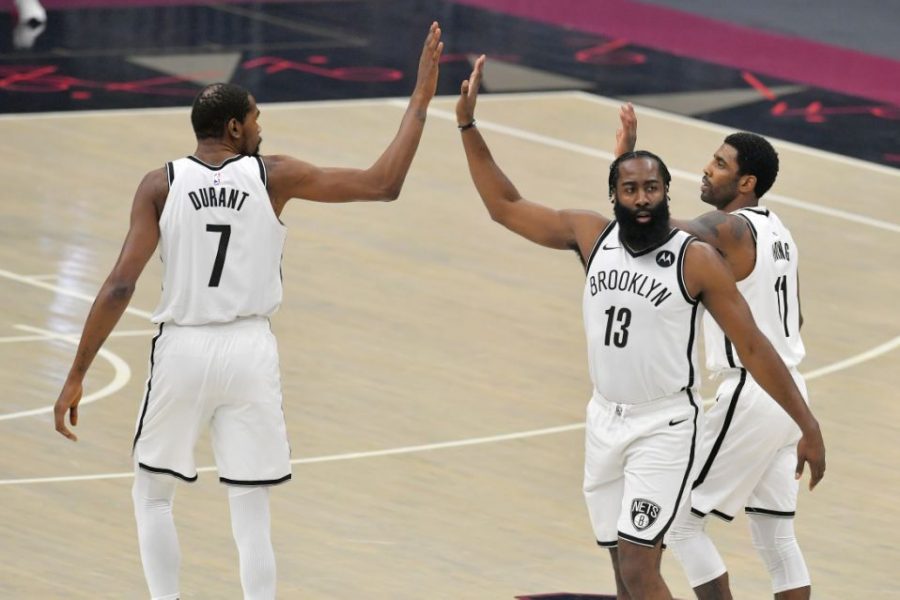 Kevin Durant, James Harden, and Kyrie Irving form a super-team for the Brooklyn Nets, who have a record of 20-12

The NBA has brought a lot of entertainment to students this school year. As we reach the midway point of the 2020-2021 season, we can look back at the memorable moments that have occurred this season. All fans and players were uncertain about what the start of the season would look like. During last season’s  playoffs, the league members stayed at hotels at the Walt Disney World resort to keep the players safe and quarantined. The location earned its nickname of the “NBA bubble,” which worked very well, as there were zero positive COVID cases. However, league managers and officials decided that they would not use the bubble for the 2020-2021 season which concerned many players about their safety and health. Several scheduled games were postponed at the start of the season due to positive cases and protocol breaches. However, the season has advanced efficiently and safely, meaning COVID protocols have become stricter, resulting in fewer players testing positive and less games being postponed.

“They’re [the NBA] doing a better job than most sports. If they wanted to be as safe as possible, they would play the rest of the season in a bubble, but they know how that’ll impact the players and their families, so I don’t think they’ll consider it until the playoffs start. Overall, they are doing a pretty good job. They are definitely staying on top of things,” junior Maxwell Lanham said.

When the bubble was implemented during the playoffs last year, many players expressed the fact that they missed their families and had poor mental health, but they realized that a sacrifice was required in order to play in a safe environment.

Despite this NBA season taking place during a pandemic, there have still been many memorable moments.

“My favorite moment has been watching [Stephen] Curry shoot the lights out every night. It’s crazy what this man can do,” Lanham said.

Stephen Curry is one of the greatest shooters of all time. He plays for the Golden State Warriors and has broken many three point shooting records. This season, he earned his career high of 62 points against the Portland Trail Blazers. He made eight three pointers during the matchup.

There are also many entertaining, talented rookies who are making a statement in the league.

“What I enjoy so far is watching Lamelo Ball play. I like watching the rookies adjust to the NBA level,” sophomore Davida Raharinaivo said.

Lamelo Ball is one of the many rookies performing at a high level this year. Anthony Edwards and Tyrese Haliburton are other rookies that are making a name for themselves.

There have been many surprises this basketball season. Some teams are underperforming while others are playing at a higher level than what was projected.

“What surprised me the most was James Harden going to the Nets,” Raharinaivo said.

James Harden is one of the best players in the league, so many fans were shocked to see him being traded to the Brooklyn Nets to team up with superstars Kevin Durant and Kyrie Irving to form what many fans call a super-team.

There have also been a lot of disappointments and teams underperforming this season.

“I’m surprised about the Wizards being the last seed in the east. I knew they wouldn’t be top 3, but I thought they would be at least 5-6 seed,” Lanham said.

It was a surprise to many fans that the Washington Wizards were not playing well. They have two all star caliber players in Bradley Beal and Russell Westbrook. However, they have now started winning more games and are no longer last in the east, with an overall record of 10-17.