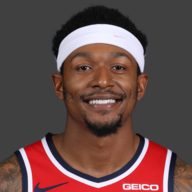 Wizards player, Bradley Beal, was a big factor in the Wizard's win against the Lakers.

On Feb. 22 the Washington Wizards beat the Los Angeles Lakers away at the Staples Center in another fan-less game in the very abnormal 2021 NBA season.

The Wizards are starting to get on a roll with the win against the Lakers being their fifth straight win. Bringing the Wizards to 11-17 on the season, and puts them in 13th in the Eastern Conference leaving them 5 places out of playoff contention.

“I think the wizards can have a chance at making the playoffs,” sophomore Omer Mohammed said. “If they keep up the form they’re in right now their chance at the playoffs will get higher as they keep going on these winning streaks and keep playing as a real team.”

This was the third game on the Wizards west coast road trip as they will play the other LA team tonight, the Clippers.

Russell Westbrook and Bradley Beal took control in last night’s game combining for 65 of the Wizards 127 points. Westbrook finished the game with 32 points, 9 assists, and 14 rebounds, while Beal had 33 points, 6 assists, and 7 rebounds.

The Wizards had a slow start to the game being out scored in the both quarters of the first half. But the Wizards turned that around big time out scoring the Lakers 78 – 61 in the second half and overtime.

One question some Wizards fans have is if Bradley Beal is in MVP contention even though his team is not doing very good at the moment. As Beal leads the league in points per game with 32.9. Some fans look at the question as, how can Beal be an MVP contender and his team not be in playoff contention. But others look at it like he isn’t on one of the best teams in the league and he still manages to carry them to a decent amount of wins.

“I think Bradley Beal could be in talks for the MVP,” sophomore Marclo Pozo said. “He clearly is one of the best players in the NBA right now and you can see that because he leads the league in points per game. But I can also see that since the Wizards aren’t very good this year some people will not look at him for MVP.”

The Wizards have some ways to go till they are seriously in playoff talks but they are definitely on the right track wilk their recent form and string of wins.