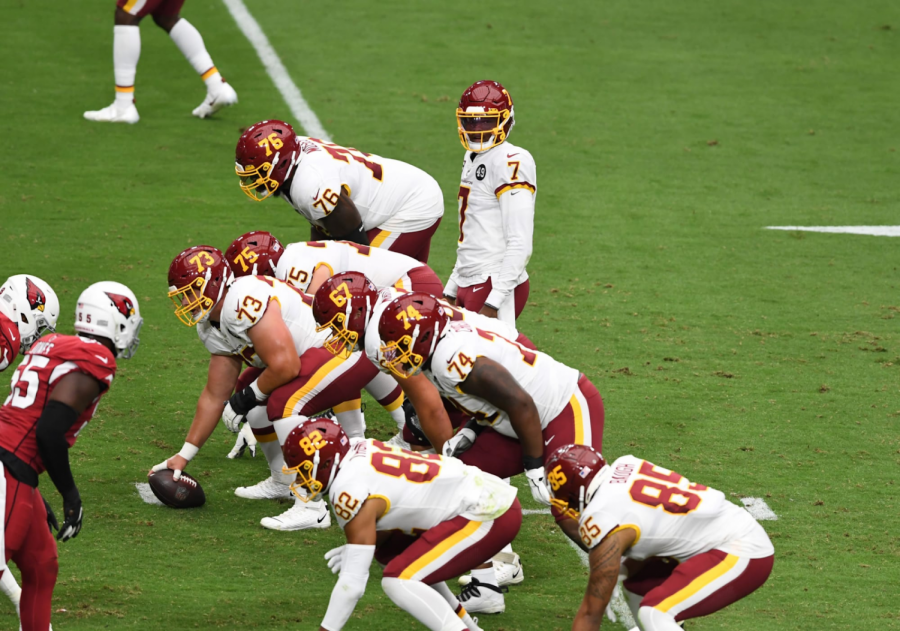 Former Washington Football Team quarterback Dwayne Haskins is under center getting ready for a play. Haskins was cut towards the end of last year's season and is now with the Pittsburgh Steelers.

On February 7, 2021 The Tampa Bay Buccaneers beat the Kansas City Chiefs 31-9 in the Super Bowl. This marked the end of the NFL season, which means that we have now officially entered the offseason. During the offseason, teams sign players to their team, and they also trade players and release players into free agency. The offseason is a crucial time for temas to better themselves for the next season, but this year, it’s especially important for the Washington Football Team.

Many fans believe That the Football Team is just a few pieces away from being superbowl contenders. They have a very young defensive core that is considered one of the best in the league. This defensive core is led by Chase Young, who they picked up last season through the NFL draft during the offseason.

“I think [signing] Deshuan Watson would be nice but it’s unrealistic since I wouldn’t be willing to have the Football team sacrifice a few of our stars to get him. I think that picking up Marcus Mariota and letting him and [Taylor] Heinicke compete for a spot would be a good idea,” sophomore Cyrus Assadzadeh said.

Deshuan Watson is one of the best quarterbacks in the NFL. He recently has requested a trade from the Houston Texans and many teams are targeting Watson to potentially trade for. A quarterback like Watson would push the Football Team to near superbowl contenders, but it will be hard for them to make a trade due to the fact that they would have to give up valuable draft picks and players.

“I definitely think that picking up a good wide receiver to be a great threat next to be a threat along with Terry McLaurin would make this team a solid playoff contender,” Assadzadeh said.

Terry Mclaurin is the star receiver for the Washington football Team. Last year McLaurin had 87 receptions and 1118 receiving yards. Many fans and football experts believe that the main thing the Football Team needs to do is help McLaurin by surrounding him with more offensive threats. The football Team can do this by picking up DeVonta Smith, Jaylen Waddle, or Ja’Marr Chase in the upcoming NFL draft.

“I believe we are very close at becoming Super Bowl contenders, all we need is a quarterback,” Senior Danny Salisbury said.