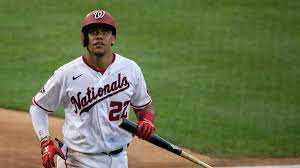 Juan Soto finishes at bat from a game last season.

With the 2021 MLB season less than two weeks away, the Nationals are looking forward to bouncing back to their championship ways.

After a historic World Series run in 2019, the Nationals struggled in a shortened 2020 season, finishing with a record of 26-34 and coming in last in the NL East. Missing key players like Anthony Rendon, Ryan Zimmerman, and Stephen Strasburg hurt the team significantly.

Two extreme bright spots for the Nationals in a difficult 2020 season were shortstop Trea Turner and outfielder Juan Soto. Both players finished top 5 in the MLB in batting average, with Trea Turner leading all of baseball in hits.

Soto showed tremendous poise at the plate, taking 41 walks, an astonishing amount for a young player, Soto will look to continue his rise to stardom this season and become the true superstar the Nationals hope he will become.

In the offseason, the Nationals added slugger first baseman Josh Bell, outfielder Kyle Schwarber, and reliever Brad Hand. They will also get longtime franchise star Ryan Zimmerman back, after opting out of the 2020 season due to COVID concerns, along with star pitcher Stephen Strasburg after wrist surgery caused him to miss the majority of the 2020 season.

“I’m excited to watch Juan Soto and Josh Bell this season, Soto is a top 5 player in baseball at only 22 years old and Bell is a new player on the team who has tons of raw power and talent, a former all star looking to regain that form,” sophomore Evan Newton said.

The Nationals are not the only team in their division who improved in the offseason, the rival Mets added superstar shortstop Francisco Lindor and catcher James McCann and the back to back division winners Atlanta Braves added veteran pitcher Charlie Morton.

The biggest surprise in spring training so far has been the resurgence of Ryan Zimmerman, the 36 year old has hit 3 home runs, has 7 RBI and is batting .462 in only 13 at bats so far this spring. Many were expecting a slow start for Zimmerman as he adapts after a year off baseball, yet his quick start has many fans excited for what he can contribute this season.

Pitcher Max Scherzer has pitched well through his first appearances in spring training, with a 0.58 whip and 2.08 ERA in 3 starts. Stephen Strasburg has also looked good in a limited role, he has pitched 4 shutout innings as he slowly returns from surgery.

With new exciting players and bounce back performances from franchise players, the Nationals will look to compete for the division crown in 2021.

“I think the Braves will win the division because they have a ton of talent but I think with some key pieces back and young stars, the Nationals can make the division interesting this season,” junior Zack Pacak said.