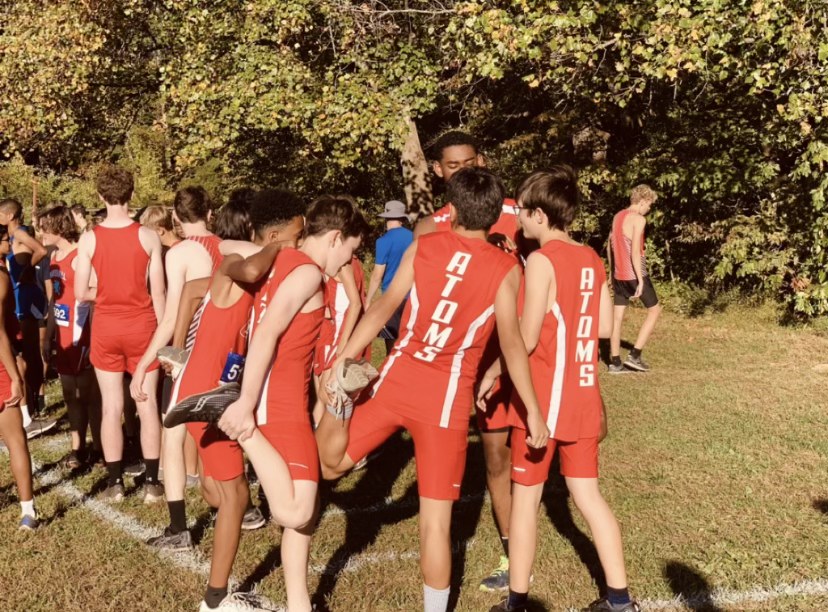 Atoms runners stretch at the starting line as they prepare for an important race.

The cross country team has put in a lot of work to prepare for the district championship meet. The district finals, which takes place on Oct. 28 at Burke Lake park, is a chance for runners to showcase the improvements they made throughout the season, as well as possibly qualify for regionals.
“I am preparing by pushing in practice and Individually,” senior Liam Mcginity said.
Mcginity, who was an athlete of the month, is the only senior on the cross country team, which means he has had to take more of a leadership role.
The team has raced in many important meets to prepare themselves for the district championship.
Their season started in early September, and runners have only shown improvement since then.
One of the big events that the team has raced in is the MileStat Invitational. The race took place on Oct.16 at Pole Green park in Mechanicsville, VA.
The top three Atom runners from the race were Liam Mcginity, Cooper Hultz, and Semir Ali, who finished with the times of 21:39, 21:49, and 21:51 respectively.
Another important race that helped atom runners prepare was the National District Burke Lake Fest, which took place at Burke Lake park on Oct. 5th.
The Burke lake park course is a 2.98 miles long course with nice trees and scenery.
This race included 102 total runners.
The Atoms had a solid race, scoring 116 points and placing 4th out of 7 teams, finishing behind Justice, Falls Church and Edison.
The top 3 Atom runners were Terry Moreno Valeriano (7th overall), Nicolas Lucas (9th), and Evan Burita (28th) who finished with the times of 18:52, 19:00, and 20:56.
“The boys cross country team has focused a lot on speeding and pacing,” head coach Ryan Willis said. “We have cut back on heavy mileage in order to keep legs fresh for the big race. A large portion of our team all run close to the same times, so we have been focusing on pacing as a group.”
It is important for runners to receive good coaching so they can prepare for the district championship meet
“We have done a variety of workouts that range from 1000, 4000, 200 meter repeat, hill repeats, and tempo runs,” Willis said.
It is also important for runners on the atoms cross country team to try and meet the goals that they set for themselves.
Goals help runners try and achieve new heights during each race.
“My goals for the [district] race are to run a personal best and for the rest of the team to do the same,” Mcginity said.
Atoms runners beating their personal bests at the district championship meet would be huge for the team as whole.
Runners getting personal best times would increase their chances of reaching the district championship meet by a substantial amount.
Many Atoms runners will use the district championship as a way to showcase improvements made to their running techniques and their times throughout the season.
“How I improved individually is trying to get better times and focusing on goals and responsibilities I have for the team,” junior Nahome Gebre said.
Gebre, who is a first year member of the team, has enjoyed the improvements he has made to his times throughout the season.
“The team has improved throughout the season by getting better times and improving teamwork,” Gebre said.
Gebre ran a time of 24:57 at the JV district championship, which took place on the Oct. 20. The race took place at Burke Lake park, a 2.98 mile long course. The JV district championship is an opportunity for the younger members of the team to showcase their improvements throughout the season.
It is important for the younger memes of the team to improve and develop, so that they can help the team in more ways next year.
The top 3 Atoms runners from the race were Brandon Manzanarez, William Peck, and Johnny Kennedy who finished with times of 21:51, 22:38 and 23:15 respectively.
“We all greatly improved our teamwork skills as well as our times,” freshmen Johnny Kenendy said.
Every runner who ran at the JV district championship improved on their previous time on the same course from earlier this month.
“The team improved a lot this season by practicing more and more,” Shewangizaw said.
Atoms runners look to stay as prepared as ever for their district championship meet.
“Each week we look at our improvements from the week before and set new goals,” Willis said. It’s important for them [runners] to know their target mile splits so they can manage their pace and time on the course.”