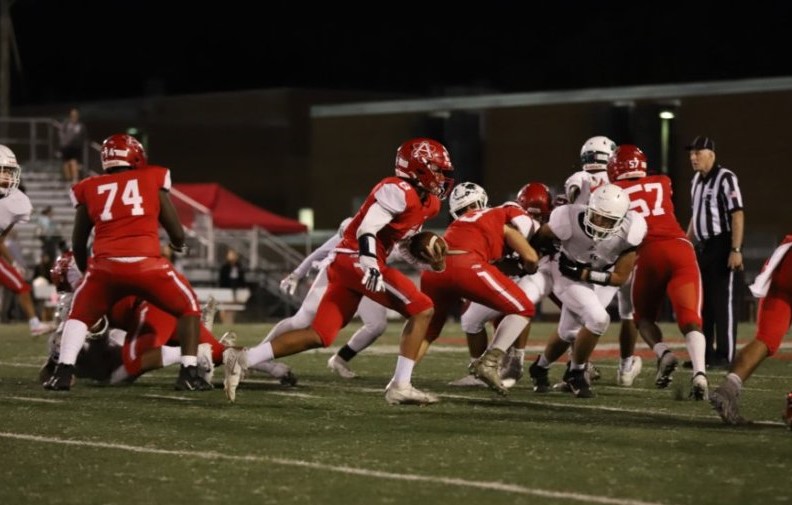 Junior quarterback Piero Vernazza-Cortez takes the handoff and tries to make a play in the open field in the first half of the Atoms victory over the Jaguars on Oct. 22. The Atoms won by a score of 21-18.

The varsity football team won their second game of the season in a statement game that spanned over the course of two days this weekend..The Atoms defeated the Jaguars by a final score of 21-18 on Saturday afternoon.
The game initially began at 7 p.m. on Friday, as the team held its annual senior night festivities.
Senior players, team managers, and cheerleaders were walked onto the field by their families as the program honored them for their contributions over the course of their high school careers.
The Atoms jumped out to an early 13-0 lead in the first half, led by two rushing touchdowns from quarterback Piero Vernazza-Cortez and an interception from cornerback Zachary Hurd.
With five minutes and 21 seconds left in regulation on Friday night and the Atoms clinging to a one point advantage, the game was abruptly stopped and delayed until the following day at noon due to an active shooter near the stadium.
“In the moment when the game was delayed I was disappointed. However, once I recognized that it helped us take away some of their momentum and it gave us an opportunity to talk with our coaches and prepare for what they had coming on the two point attempt and on defense, I felt It helped us rest and come out with the win, junior quarterback and defensive back Piero Vernazza-Cortez said.
The game resumed with a score of 13-12 and Falls Church in the midst of a two point conversion attempt that would have given them the lead and all of the momentum with the 4th quarter clock waning.
The conversion was denied by the Atoms on the goal line, although the Jaguars wouldn’t go quietly.
AHS fumbled on the ensuing possession, and Falls Church promptly scored a touchdown to give them the lead with less than four minutes to play.
Senior Zachary Hurd and the Atoms responded with an electrifying finish.
A 70 yard run from Hurd down the left sideline set up a touchdown score to put them back in the lead.
With AHS needing one final stop to clinch the victory, senior linebacker Yazid Sakta made a game-clinching interception, returning it to the Falls Church five yard line and giving the Atoms their first home victory of the 2021 season.
“Senior night was definitely a night to remember, we were able to make many big plays on defense including the two point conversion on Saturday morning because we came together as a unit and made plays as a team,” senior offensive and defensive lineman Zack Pacak said.
“A big point of emphasis for us entering Friday night was to take #18 out of the game, we knew he was a playmaker and a threat for them offensively and we were able to do a good job of neutralizing him this weekend,” Pacak said.
The players did just that, with the defense executing the game plan and holding the Jaguars to just 18 points, their second lowest score allowed this season.
“We knew that we were better than our record indicated and we worked hard all week so that we could prove it on Friday night,” junior linebacker Connor Lape said. “I’m proud of our team and the work we put in.”
The 2021 season has not been easy for the Atoms, a tough start to the season set the team at 0-2, before hanging a 40 point offensive performance on the Lewis Lancers on their own turf.
The victory was followed by five straight losses and the record and rest of season outlook began to be dark for the players and coaches.
Despite the adversity of the season, injuries, and a stalled game, the Atoms were able to show up when it mattered most on Saturday morning.
The Atoms will travel to Justice this Friday on 10/29 for the final game of the regular season.
Justice is 4-4 with impressive victories over Edison and Falls Church, as well as throttling shutout losses to South Country and James Robinson.
The Wolves are coming off of a three game winning streak and looking to continue the trend against AHS in their final game of the season.
AHS will be put to the test against Justice, with an in conference game on the road and a chance to finish their season on a strong note.