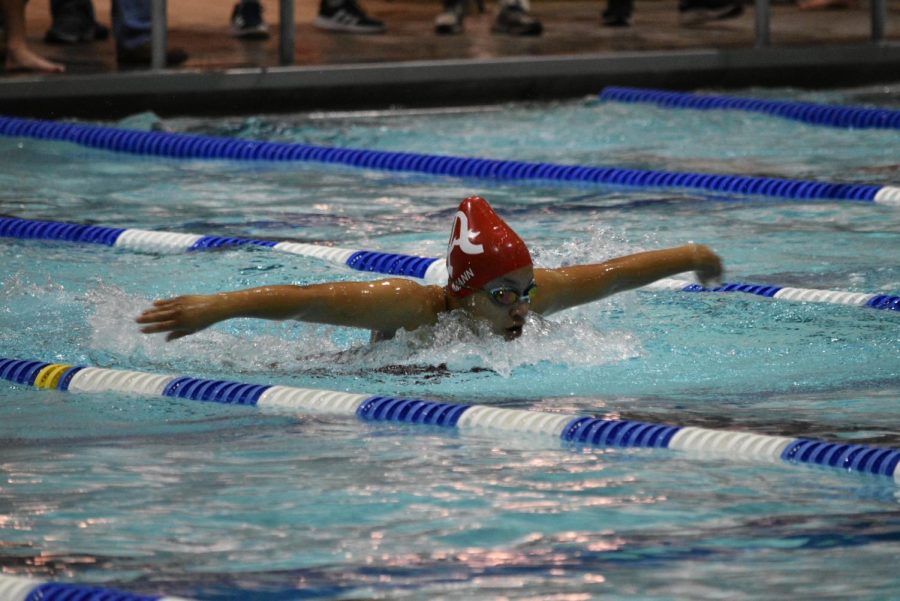 The AHS swim team will take 3-0 and 2-1 records into their upcoming meet vs. Justice this Friday, Dec. 17.
The Atoms have jumped out to a quick start, with both the boys and girls teams winning over Lewis and Hayfield, and the boys team defeating Falls Church on Dec. 11 by a score of 192-109. The girls team was narrowly defeated by the Jaguars 132-173 in a close contest.
Despite the AHS girls loss to the Jaguars, the team was proud of the way they competed and fought through adversity on the second leg of a back-to-back performance.
“The meet was really hard and obviously we did not get the result we were hoping for. However, we gave it our all regardless and there’s still room for improvements to make heading into next week and the rest of the season,” junior Maya Mann said.
The start to the 2021 season has been an encouraging one for the Atoms, who were improved in 2020 and looking to take a step even further in 2021. With a combined 5-1 record through three meets, the confidence has grown even further as the team has its eyes set on the district championship.
“We work extremely hard at practice to build up stamina because our swimmers are asked to perform four times in a two hour period,” head coach Carmen Lucas said. “Our kids have accomplished so much already and we are setting the bar higher for both our boys & girls going forward.”
A huge reason for the early success has been the balance of the team. Both veterans and younger swimmers have made a big impact early.
Senior Evan Silas and junior Emma Findler have been performing well in their respective events. Thriving early in their newfound roles as veterans.
Freshman Finn Sample has been impressive in the 100 yard freestyle, backstroke and breaststroke, as well as the 200 yard IM. Sophomore Bridget Murray has also performed well in the 200 yard IM and 100 yard fly for the girls team.
Swimmers have also done a great job of supporting their teammates in between events.
“Keeping the energy high is key because swimming is so much of a mental sport,” Lucas said. “Getting on the blocks or boards and seeing your teammates have your back is such an advantage.”
The Atoms have four remaining meets over the course of December and January, with the district playoffs set for Jan. 27-29.
“I’m hoping the boys can stay undefeated for as long as possible, we have a few important meets coming up that could determine the district rankings at the end of the year,” sophomore Colin McGee said.
The upcoming match up between the Atoms and the Wolves is a highly anticipated one, as the Wolves are coming off consecutive victories for both their boys and girls teams.
With a win over Justice, AHS could take a commanding position in the front of the district into the winter holidays and be primed for success as the calendar turns to 2022.