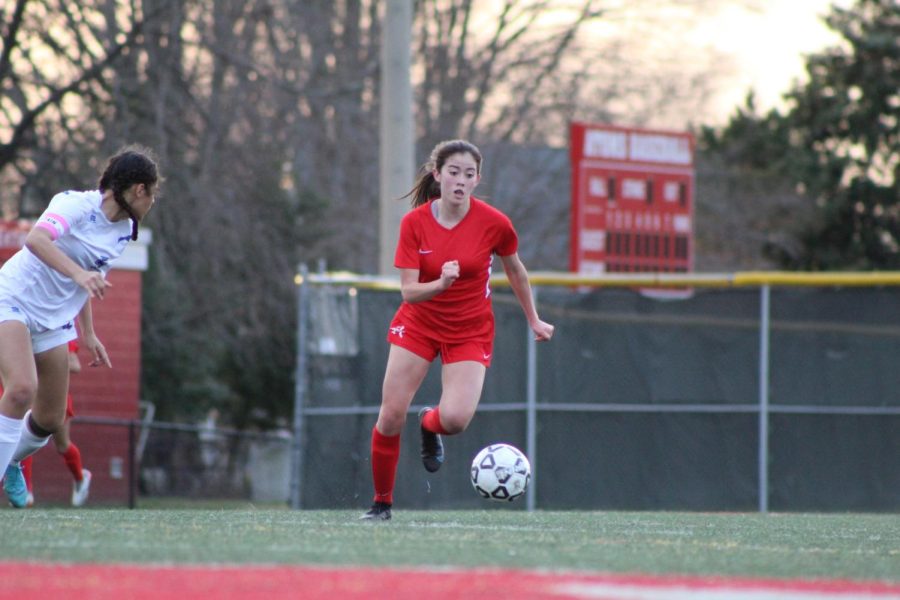 Junior Chelsi Lilli dribbles the ball up the field in pursuit of the goal to put the Atoms ahead against Fairfax.

Girls soccer has started their season with a 1-2 record, including a 1-3 loss to Herndon, a 2-1 victory against Gar-field, and a 1-7 loss against Fairfax.
Despite the disappointing recent loss, the Atoms showed many positive signs in their first win of the season against Gar-field and hope to replicate that against their next two opponents: Lake Braddock and Forest Park.
“I think our first couple of games went pretty well,” junior center back Nicole Perez said. “We had our first win in the second game which really made us feel more confident in ourselves. We also have two other games that were competitive and difficult which put us in a good position to improve.”
The upcoming game against Lake Braddock on March 28 (results not available at time of publishing) will force the Atoms to play up to a very high level of competition. The Bruins started off their season with a 3-0 record while shutting out every opponent by scores of 3-0, 12-0, and 8-0 before suffering their first loss against Yorktown by a score of 2-4.
Prior to the season, the Atoms had two coaching changes. Head coach Jake Vaughn and assistant coach John DeOrnellas both coached boys soccer last year but switched to coaching the girls team this year. Coaching changes have come with different styles of play, meaning the players have had to adjust as quickly as possible.
“I think that we have all tried to be as open as possible for the new coaching staff,” Perez said. “Having a new coaching brings a different way of teaching and gameplay techniques which we have done a good job adapting to.”
The team has had a decent start to the season and the players have been performing well, but many players believe they can be playing even better and gain more chemistry.
“I think the season has gone okay, but we still need to work on things,” sophomore midfielder Jana Russel said. “We are starting to work together more and understand how everyone plays.”
Juniors Olivia Cruz and Amanda Salisbury have stepped up as captains for the Atoms. Cruz has scored three goals in the teams recent two games, including a game-winning free kick against Gar-field on March 17.
After the away game against Lake Braddock, AHS will play five straight home games. This stretch of matches will serve as a great opportunity for the Atoms to win some games with home field advantage and push for a winning record.
“I think we have played alright so far,” junior forward Chelsi Lilli said. “We are definitely still learning to play with one another but that will only come with time and more practice. We are improving more and more with each game which is really exciting and I am hopeful for the rest of our season.”