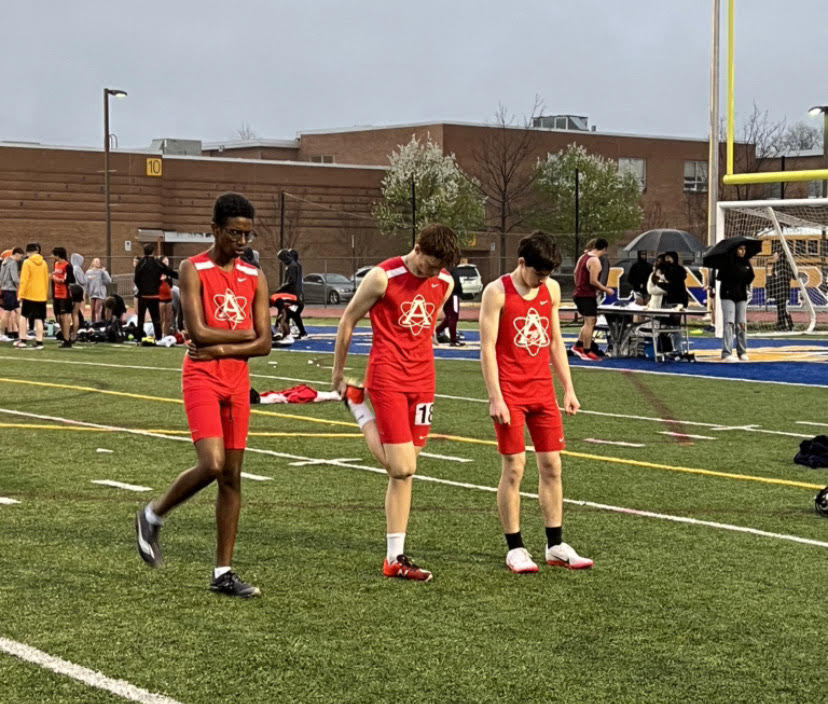 With the outdoor track season underway, the runners have been training hard and have performed well in their first two meets.
So far, the Atoms have competed at John R. Lewis on March 23 and ran in an invitational at Woodson on March 26.
Although the runners and coaches hoped the start of the spring season would come with warmer temperatures, the first two meets were paired with cold and rainy weather, which made good times hard to come by.
“The first two meets of this season have been in the 40s with rain, so I do not really count them as spring season openers,” junior jumper and sprinter Miles Lanham said.
Lanham is coming off of an impressive winter track season, where he broke the triple jump record at AHS, won states in triple jump, and placed seventh at the national competition in New York. “Although nationals did not go how I planned it. It was a fun experience and I look forward to performing even better next time,” Lanham said.
Despite the unfavorable weather conditions, the Atoms did outstanding in several events during the two meets, including placing top three out of 30 schools and medaling in the 4x100m relay.
“The first two meets were pretty difficult to run at,” junior sprinter Rakan Alqadi said. “It was raining very hard and all of us were soaked, which made running fast challenging. At our second meet, it was even crazier with high winds and it snowed as well, which is not normal for spring track,” Alqadi said.
However, the Atoms have plenty of upcoming meets to earn personal bests before districts and regionals at the end of the season.
Their next meet will be on March 30 at Justice High School, followed by an April 13 meet at Thomas Edison High School after spring break.
These two meets will give the runners a chance to compete against high-level runners in the district.
Overall, the track squad has many talented runners and believes they can do great things this season.
“We have been doing the workouts our coach has been giving us to help us improve,” Alqadi said. “My goal for the rest of the season is to PR in the 100m dash, the 200m dash, and qualify for states in the 4x100m relay with my teammates,” Alqadi said.
The distance runners also performed well at their meets, earning several PR’s in the 1600m race.
Sophomore Semir Ali and freshman Cooper Holtz ran mile times of 5:46 and 5:47 at the Legard Relays.
Runners of all distances are very excited for what the rest of the season has to offer.
With nine more meets before districts, runners are eager to compete and do their best before their results really start to matter.
“I have set goals to hit this season and will work very hard to accomplish them,” Lanham said. “Overall, I look forward to this season and the improvements I can make.”