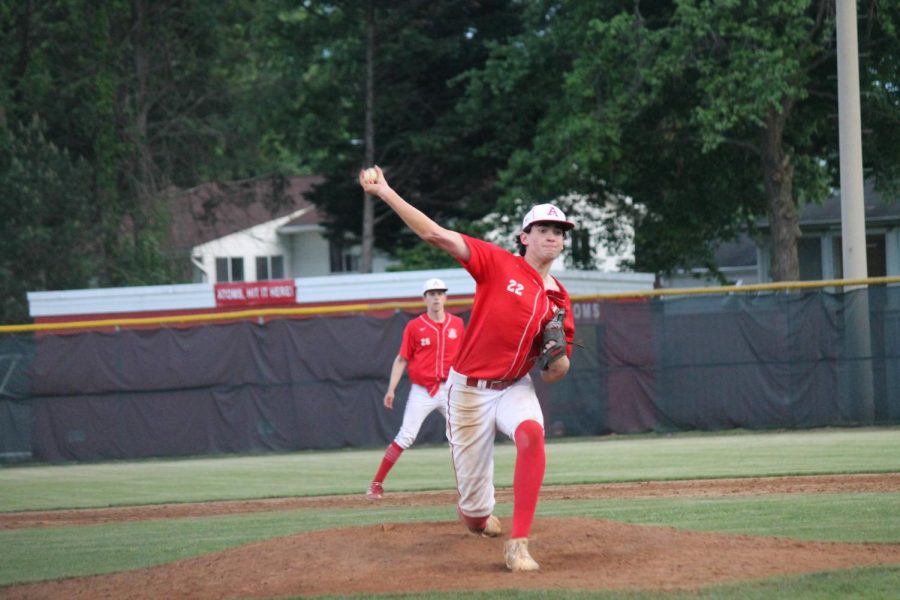 Senior Finn Scott=Daniels throws a fastball in the first inning of the Atoms district semifinal game against Falls Church.

The Atoms baseball team lost by a final score of 5-4 in the district semifinal against Falls Church Jaguars on May 17.
The Atoms fell behind early 4-0, but battled back into the game with two runs from junior David Sewall, two hits for senior Tyler Plank, and a huge 2-RBI single from senior Zack Pacak in the bottom of the sixth inning to tie the game at 4-4.
AHS was unable to get any offensive momentum following the single from Pacak in the sixth, as they failed to score the winning run in the final three innings. Their best oppurtunity came in the bottom of the seventh with a runner on second, but Sewall failed to deliver the winning hit for AHS.
The Atoms leaned heavily into their senior arms, with senior Finn Scott-Daniels throwing the first four innings of the game allowing four runs, before senior Grant Yungner pitched the final five innings.
“I have to commend senior Grant Yungner for his pitching performance against Falls Church, he was a first team all-district player and did not give up a hit after he entered the game in the fifth,” head coach Christopher Bagot said.
The game went into extra innings, and the Jaguars were able to squeeze across the winning run on an error in the top of the ninth inning.
“Obviously it’s not the way we wanted our playoff run to end, but there was a point in this season where we were not playing good baseball and I am proud to be a member of a team that has shown so much fight and growth,” junior Evan Newton said.
The Atoms showed a good offensive approach against the Jaguars, but exceptional defensive outfield play took away several extra-base hits and opportunities for the Atoms to win the game.
Despite the loss, the Atoms ended their regular season on a strong note, winning their final four regular season games, including a 11-1 victory over Edison to give them a 11-9 record in the regular season and 6-6 record in conference play.
“I’d say our biggest reason for improvement was our younger guys stepping up and everyone having a collective goal to win,” senior Zack Pacak said.
The Atoms had a number of standout players, with seniors Tyler Plank and Grant Yungner earning first team all-district pitcher and utility player. Second team all-district honors also went to senior catcher Zack Pacak, sophomore third baseman Zach Plank, and senior pitcher Finn Scott-Daniels.
AHS was able to clinch a home playoff game in the quarterfinals, where they came back from a 6-2 deficit and defeated the TJ Colonials 7-6 in eight innings on May 13. In which, AHS was led by a solid pitching performance from senior Tyler Plank, before senior Finn Scott Daniels finished the final 1 and 1/3 innings, allowing zero earned runs.
“My favorite memory from the season was hitting the game tying, 3 RBI triple in the bottom of the seventh inning in the district quarterfinal game to help us advance,” sophomore Zach Plank said.
Plank was one of two sophomores who made a huge impact for the Atoms this season, alongside TK Decareau who batted .308 and had a huge hit for the Atoms in their semifinal match.
By winning their first playoff game and finishing as the #3 seed in the conference, the Atoms will host the South County Stallions in the first round of regional play on May 25.
South County finished as the #6 seed in the Patriot District, however they will be a tough challenge for the Atoms in their attempt to keep their season alive due to their explosive offensive attack.
The Atoms have constantly battled back throughout this season after losing nine valuable seniors last season. They have won three games down to their final out and tied others, and they will lean on that resilience in hopes of extending their season on May 25.