The young and reckless 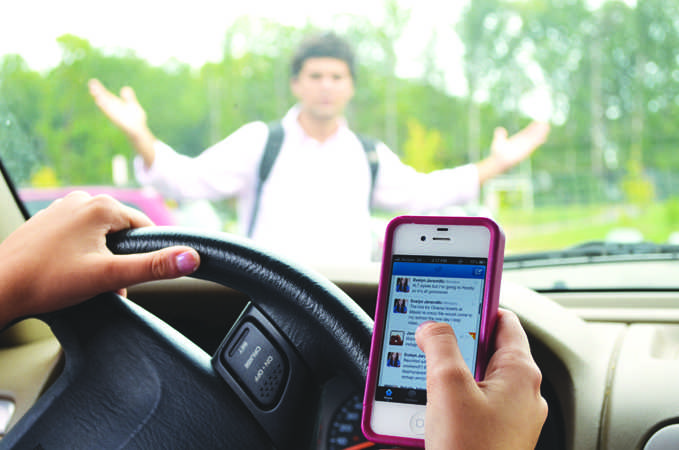 From texting, Instagram and Twitter to maps and IPhone apps, students are constantly checking their phones while driving.

There is a day in a young person’s life that signifies a teenager’s transition to adulthood. It is the day when a teenager receives that magical, light blue piece of paper that grants them their freedom on the road; there driving license. Many teens have looked forward to this day with anticipation ever since they were children driving in plastic cars and playing simulation video games.

With all the excitement and thrills of being able to go wherever you desire without the nagging of a parent beside you, teens overlook the tremendous amount of responsibilities placed upon them. Many think they’re almost invincible, picking up dangerous habits from the start of their driving careers without stopping to think about the possible consequences of their actions

“When I first got my license my parents bought me a new car, so I was careless and didn’t pay much attention to anything,” senior Jordan Pokraka said. “I was in an accident that totaled my car and now I am much more careful when driving.”

Because of the technological state the world is in, when someone’s phone buzzes it’s an automatic impulse to read the text received, regardless of what they’re doing at the time. Anything concerning cell phones is a risk when operating a motor vehicle, especially texting. The use of a handheld or bluetooth cell phone for anyone under the age of 18 is illegal in Virginia, but many teens are unaware of this law.

“My worst habit is definitely texting while driving, but I’ve never been in an accident because of it. One of my worst driving offenses was when I got pulled over at 4:45 am on the Fourth of July for going 22 miles over the speed limit. The cop was pretty chill but my ticket was $180,” senior Brody El-Achi said.

As teenagers, we are already new to the road and the responsibilities of driving. Using your cellphone while driving quadruples your chance of getting into a crash. For every second that you are looking down at your phone you are putting yourself and others at risk, yet many teenagers still continue to practice this dangerous habit.

“I don’t do any of that because I want to be safe and I would rather wait five minutes to check my phone than die, people who don’t follow the rules are being dumb and should think of the consequences,” junior Kyle Peich said.

From texting, tweeting, talking to friends and eating, to even changing clothes teenagers are constantly being distracted while behind the wheel. It is in the teenage nature to be constantly multi-tasking, but this habit of doing multiples things at once needs to stop when drivers get on the road. According to the AAA foundation for traffic safety, distracted driving causes 8,000 accidents a day.

“I change the music a lot while I’m driving. I was at an intersection changing the song on my ipod and I rear ended the car in front of me,” junior Eric Mejean said.

One of the biggest distractions that both teenagers and many parents are guilty of is music. As the music volume gets louder, the driver turns their attention more towards the rhythm and lyrics of the music and less on the road.

“I blast my music super loud to the point where I can’t hear if people are honking,” junior Jennifer Nguyen said. “I also let people take the wheel for me if I’m fixing my hair or something while I’m driving and I sometimes text with one hand or eat while I’m driving.”

We’ve all been there, that moment when you are running late for school, and it seems like you are hitting every red light possible. On top of that, the driver in front of you decides to drive below the speed limit. For most of us, our natural impulse is to speed up and try to pass the slower drivers. It is in situations like these where our impatience and anger takes over, that we as drivers are at greater risk.

“If anybody driving in front of me is going under the speed limit I tailgate them and tend to get angry and freak out and yell,” Mejean said.

The AAA foundation found that aggressive driving is a factor in nearly 56 percent of fatal car accidents. Along with road rage comes speeding. Many teens see speeding as a minor offense, something that everybody does, but fail to see that speeding can harbor serious consequences.

“I was driving home from school going 40 mph on a windy, narrow road with 3 unrelated people in the car when I realized I missed a turn. I tried to quickly turn but ended up turning my wheel too sharply and when I slammed on my brakes I ended up driving through a fence into a ditch,” senior Julia Copenhaver said. “It was really an early wake up call about how dangerous driving can be and how I need to pay attention to the road and concentrate on my speed.”

Despite what many teen drivers think, we are not invincible, and it just takes one second of carelessness to change everything.