Technology takes a toll on relationships 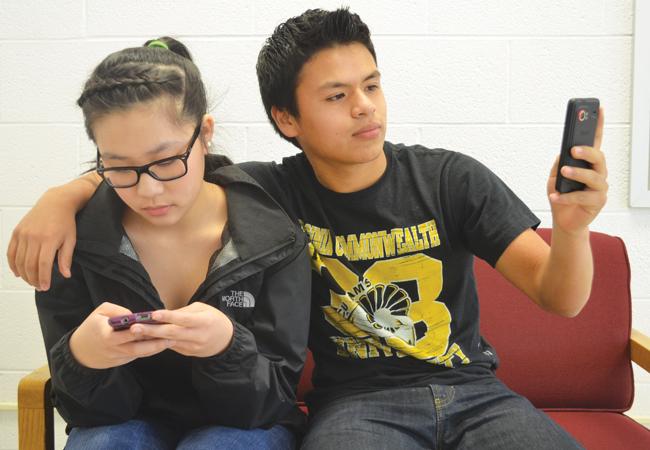 The whole premise behind texting and social media is to keep people connected, but is this actually the truth? As the use of technology for communication increases, face to face time and traditional relationships have become a thing of the past.

When people text, they are able to edit themselves and chose their words very wisely. Yes, this may save you from saying offensive things, but in the end the person who you are communicating with isn’t getting the real you. It’s also very easy to embellish and lie over text in hopes of impressing the person who you’re talking to, making it harder for people to get to know you for who you really are.

“It has changed how relationships develop in recent years,” junior Hayat Yusuf said. “It makes it hard for people to build an actual relationship. Also, like the MTV show Catfish, people can make up fake identities and information about themselves.”

Instead of settling problems in person, people result to fighting over text. But in cyber fights, people have a screen to hide behind and will say much more hurtful things than if the fight was in person. This leads to bad breakups and broken friendships.

Broken friendships are not only caused by online fights, but also by a lack of communication when actually hanging out in person. Almost any high schooler can think back to a time when they’ve been at a dinner or something with their friends and have noticed that every single person is on their phones.

“I think texting negatively impacts relationships and friendships; whenever my friends and I are together we’re always on our phones and rarely actually talk,” freshman Jacob Roop said.

Since we are a generation addicted to technology, we often forget how others can perceive excessive texting while on a date as rude.

“I believe that neither person should be on their phone during a date since they are in fact there to socialize with each other,” senior Gunnar Thompson said. “The only time phone use is appropriate during a date is maybe for an ice breaker.”

Texting and technology does however have its benefits when it comes to relationships. It’s much easier to make plans and stay in touch through instant messaging. Also, social media allows you to meet new people a lot easier and broaden your friend groups.

“It can have a positive effect for people with long distance relationships since they don’t get to see each other as often as they like they can Skype or FaceTime,” senior Rabeeah Raza said.

As technology advances we continually seem to forget the importance and preciousness of face to face time and what it actually feels like to have a real, close relationship.

“There are times that technology makes communication easier when there’s distance but you run the risk of communication being less personal that it becomes a substitute for person to person interaction,” Ms. Hunt said.

Personal relationships have also changed through social media sites, such as Facebook and Twitter, taking society by storm. People now equate maintaining relationships as liking old friend’s statuses and profile pictures, without actually having human contact. Often times people will comment on an old friend’s picture saying, ‘I miss you, we have to catch up soon!’ but never actually make the effort to see each other in person.

“Facebook is a way for people to contact each other without facing the consequences of meeting in person,” senior Ulugbek Israilov said. “Also for existing friendships, people use Facebook instead of meeting up to avoid awkward situations. Over the Internet, one has time to plan out their responses but in real life people are expected to respond automatically.”

When asked about technology’s effect on society, English teacher Joy Korones tells a story about how she saved all of the letters her current husband wrote to her while they were dating, and comments that the youth of today will not have written letters and things to save and reminisce with.

“Emails and texts are so casual, I think there’s something nice about letters,” Korones said.

At the end of the day sending a smiley face emoticon and liking a photo does not equate to a real hug and face to face time with friends. Some things in life are too precious to experience behind a screen.