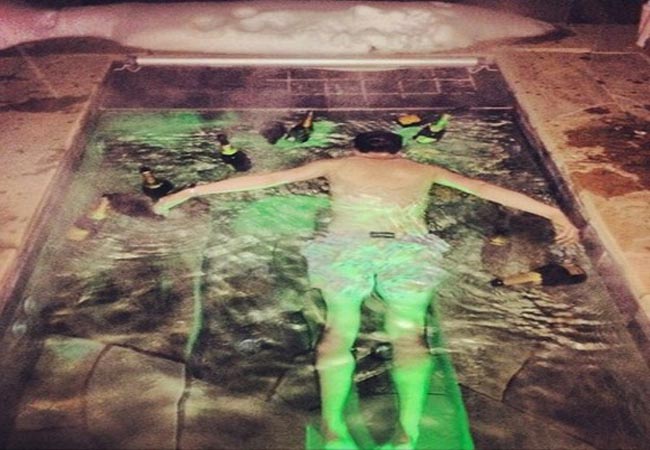 A "rich kid" from the controversial blog swimming in a pool of champagne in a recent post.

It’s after school and students are on their phones. They are busy browsing the news feed on their Twitter and Instagram accounts, only to find it clogged with selfies and drama.

Social media has evolved to an outlet where oversharing and overhyped trends go hand in hand.   With that in mind, certain things should never done online.

For instance, selfies. We all love them: from President Obama to Kim Kardashian and the average student. Taking selfies among students has become a competition to see who can post the most pictures and receive the most attention in return.

“I’ve had my fair share of selfies, but I don’t think you need to be posting a picture all the time. It’s too much.” sophomore Mahlet Ayele said.

Students will do anything for as many “likes and favorites” from their friends. It’s common to see girls slap on buckets of mascara and lipstick like they’re going to a photo shoot. Some will even wear revealing clothing and check their “selfie lighting” for that extra “wow-factor.”

Excessively staging pictures and sharing them online are bad habits. Instead of making a good impression, people are labeling themselves as eyesores.

Repetitive poses like the duck face and sitting on a sink to make certain areas of the body more attractive. They do not look photogenic and anyone can mistakenly infer that someone is getting ready to kiss their cellphone or in a desperate need of a bathroom break.

“It annoys me when a girl takes a picture of herself with obviously cleavage showing. If flaunting breasts weren’t enough, it’s annoying to see captions that are just calling for attention,” senior Suzie Laime said.

“[I hate it when people take] pictures of themselves in the bathroom captioned with a cheesy quote with no relevance to the picture,” sophomore Lara Raid said.

According to Laime, girls are not always the repetitive and obnoxious ones on social media, guys are no exception.

“Guys sometimes have annoying photos, Laime said. Some guys constantly keep posting pictures of themselves shirtless. Yes, you’re proud, but why do you always have to remind us?”

The “chicken wing” is another repetitive pose. Come on people, there thousands of other poses known to man and all you can think of is pumping your arms out like you’re about to flap your wings?

Aside from poses, there has been recent controversy on wealthy teens and young adults showing off their money in a Tumblr account called the “Rich Kids of Instagram.”

These rich twenty-somethings post selfies of them swimming in a pool of champagne jumping off their yachts to anyone who pays attention.

Students like Laime frequently encounters such posts from students and she’s disgusted by the pointless attention seeking concept.

“Do you really think that if you post pictures of designer stuff people will [notice you]? What your real friends might think. Some people will just like you only for your stuff,” Laime said.

Many students can agree that social media has gotten too personal among teens.  When online, focus on yourself and not others.

“I don’t understand why some people feel that it is [acceptable] and expect [so much] commentary,” Laime said.