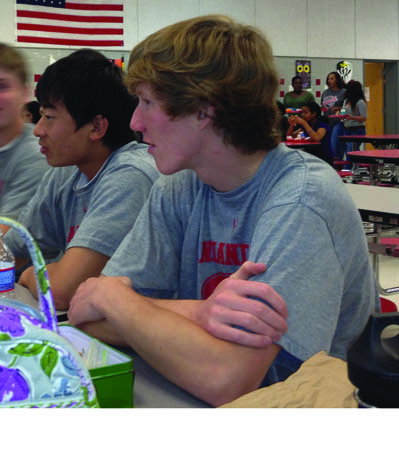 In almost every teen movie that hits the big screen, Hollywood portrays the social groups at schools with rather trite stereotypes. One table will feature the “dumb jocks” and meatheads with their letterman jackets, another table will have the preppy, fake cheerleaders wearing all designer clothes and a third will be filled with the “Goths” wearing all black as they listen to heavy metal.

We all know that these stereotypes do not apply to everyone, but does this very clichéd view of high school social groups actually hold some truth?

Despite the different cultures and faces that make up the extremely diverse and unique environment of AHS, many people seem to think that these stereotypes are still evident in the halls of our school.

“I think stereotyping exists a lot at AHS, probably the most with Goths, emos and blonds,” sophomore Nikita Coelho said. “I feel like people who associate themselves with a group tend to dress more and more like that group; for example, emos will dress in all black and sometimes people can take it over the top.”

Teenagers tend to look at people and instantly assume that they are part of a certain group, whether it be the jocks, preps, Goths or emos. These assumptions are based off of their appearance and the way they dress.

“Stereotyping is definitely at AHS; I think a lot of people end up judging a book by its cover,” senior Maxwell Talley said. “The way people sit together at lunch only enhances these stereotypes.”

Many people have recognized the fact that there is a lot of racial stereotyping at AHS, but they don’t seem to understand the extreme social stereotyping that goes on. Most teens make these social judgments of fellow students without noticing.

Some students don’t mind being stereotyped, because they’ve accepted their expected roles in high school.

“I don’t care what people specifically see me as, but I hang out with mostly jocks and people who play sports by choice because that’s who I’m friends with and I’m used to being around athletes from the sports I play,” junior James Terrell said.