AHS alum lights up faces one bulb at a time

Check out the stunning house of Christmas lights on 5406 Fremont St. in North Springfield, VA 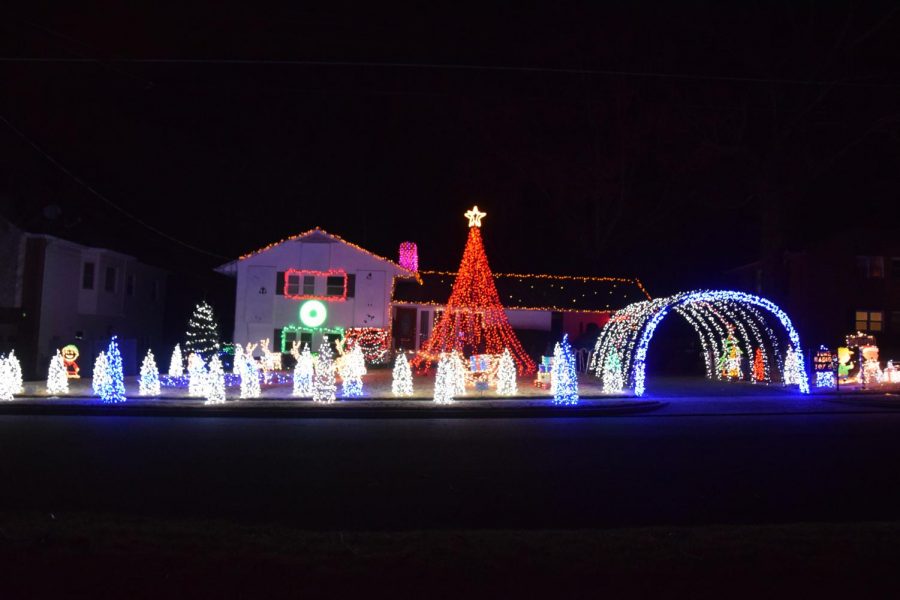 Forget the long trip to see the Smithsonian Zoolights or the Meadowlark Winter Walk of Lights; it’s all about the light attraction on 5406 Fremont St. in North Springfield, Virginia.

Every year AHS class of ‘73 alum and retired fireman Cliff Berner brings smiles to faces with his 24 minute original, mesmeric, award-winning light show. Onlookers from nearby and even from other states stop by to check out the talking Loony Toon characters, the music and Santa Clause passing out candy canes.

It all began 30 years ago when he bought his childhood house from his parents. The lights first started as a static display with 11 Christmas trees connected together by lights and stars. It wasn’t until 12 years ago when he transitioned to using computerized lights that it turned into a show that everybody knows and loves.

“[Putting up the lights] is fun to me, but it’s a lot of work,” Berner said. “It just beats you to death, and this year I wasn’t going to do it, but a friend came over and convinced me to keep up the tradition.”

Although putting up the demonstration takes a month and a half of hard work and focus all by himself, he continues to do it for his community and the joy that it brings them.

In total, the display contains approximately 5,500 light bulbs, with a single arch consisting of 1,600 lights bulbs and 16 channels, and a newly rebuilt wreath with 1,900 LED lights and 200 strobes.

The lights change color in tune to the music that blasts from the speakers in his yard. With an F.M. transmitter, the music is also available through his own personal radio station on 107.5 to observers who wish to stay in their cars, protected from the cold.

Each bulb is controlled individually by control panels and they all sync with the songs playing on the radio.

Berner controls every action the lights make with his computer. He sits down with his headphones and listens to each song over and over again until he gets it exactly how he envisions the pattern.

There are red, green and blue lights and with his imagination, he pictures what he wants the lights to do and when he wants them to change.

When that’s done, he goes outside and watches each bulb to make sure it’s exactly how he wants it.

“I can only imagine the patience and dedication it takes for [Berner] to decorate his yard with lights to the extent that he does,” senior Abby Reynolds said. “But I’m sure glad he does it because it has become a holiday tradition for me and my family.”

In addition to bringing smiles to faces with the plethora of lights, Berner spreads holiday cheer when he dresses up as Santa Clause and hands out candy canes in front of his house. Not only does he cheer up his visitors, he goes out of his way to help homeless and abused children as well.

“I love to play Santa Clause because I am a semi-professional,” Berner said. “I dress up for homeless people and abused children. Being a retired fireman, I have a lot of connections through my friends and my wife, Terry, that are still in the department.”

The kids love to see him every year and are excited to receive candy canes.

“They bring me in as Santa Clause and they have the fire trucks with the red lights and sirens and we go to the homeless shelters for abused children and I give them all gifts.”

Obviously Berner has other interests, especially since he is retired, but currently the light show production takes up all of his time. The time and work he has dedicated to making people smile certainly has not gone unnoticed. He has won awards such as the North Springfield Civic Association Best

“I voted for Berner and his lights to win the Northern Virginia House Lights award, because he never disappoints and every aspect of the show is unique and cool,” sophomore TJ Hutnan said.

Berner doesn’t care about the awards or recognition, he is just happy to spread holiday cheer and make the public’s night.

“I always say, ‘why didn’t I put up a simple display like my neighbor across the street? That’s all I need,’ but it makes me happy and I never realized I would be people’s Christmas tradition. I’ve literally had people stand out here and tell me that. They start getting emotional and then I start getting emotional too. It’s just a great feeling to reach so many people,” Berner said.

How long the lights will continue on in the years to come is unknown, but this year they are estimated to stay up and lit until Dec. 31.

“I never imagined it would be this big, but this year is going to be my biggest show ever,” Berner said.

Come and witness the fascinating and mesmeric lights yourself, you won’t be disappointed. Berner asks to please avoid parking cars right in front of the house or in anyone’s yard.