The Pho Factory delivers in all aspects 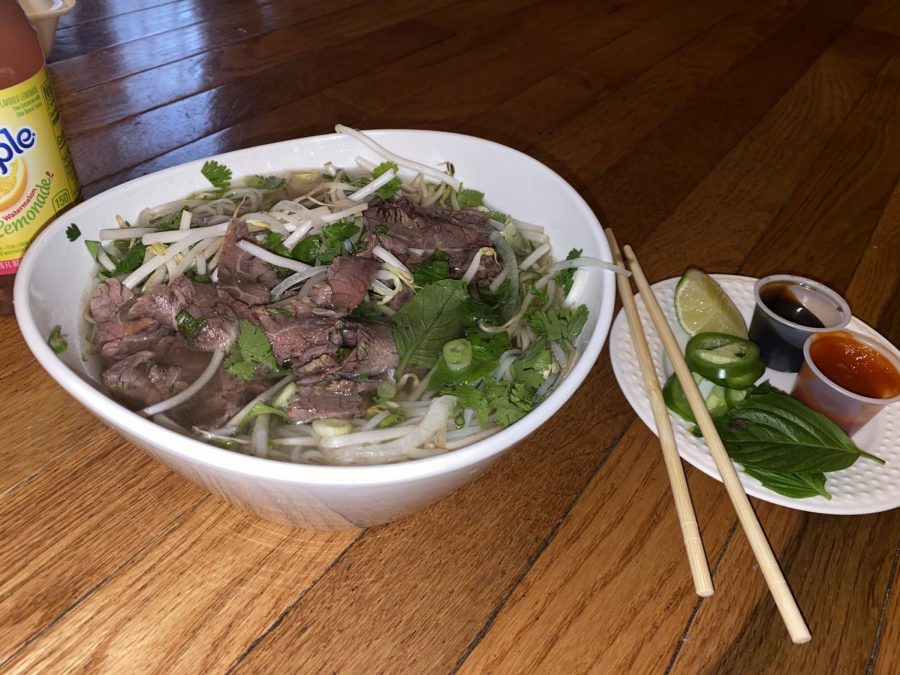 Vietnamese Pho is a popular dish that many enjoy eating, including myself. It’s a Vietnamese soup that consists of broth, your choice of meat, herbs,vegetables and rice noodles. It is a popular street food in Vietnam that has made its way to the taste buds of Americans.
Living in Virginia makes it hard to find the perfect place to get pho from because the places around aren’t very appetizing except for one place: The Pho Factory.
The Pho Factory offers a variety of delicious types of pho such as seafood pho which has shrimp, calamari, and fish. They also have chicken, steak, and vegetarian pho as well as many more variations.
The Pho Factory also offers many dishes aside from pho such as rice dishes and vegetarian dishes like a tofu vermicelli bowl. There are also different types of pan fried noodles and lots of starters and sides. One of the options I liked the most was the bubble tea. They make their own bubble tea, and it is a delicious drink to enjoy on the side with your food.
During a recent outing, I decided to try out the restaurant for the first time. I was expecting to be disappointed with the lack of authenticity of the pho, but I was shocked at how good the food was.
After reviewing the menu, I decided to order the well done flank steak pho with a side of calamari and two spring rolls.
The food was packed with flavor unlike any other pho that I have tried. My pho came with different kinds of herbs and vegetables such as baby corn, green onion, mint leaves, jalapenos and bean sprouts. The spring rolls were hot and smelled great when I got them and the calamari was cooked to perfection.
The Pho Factory is unlike any other pho restaurant because not only do they have a cozy feel to the atmosphere and a traditional taste in the food, but the customer service is efficient and timely.
It took them less than 15 minutes to prepare my food which caught by me surprise since I’ve waited over half an hour before at different pho places.
What I like most about the pho itself is that you get to pick what you want and how you want it cooked. You can even choose the type of broth that they use for soup or ask to have certain vegetables removed or added.
The Pho Factory usually isn’t very busy which is definitely an upside because the restaurant isn’t that big
The employees are very kind and attend to all of our wants quickly and efficiently. I’ll definitely come back for a second time to explore their wide variety of food.