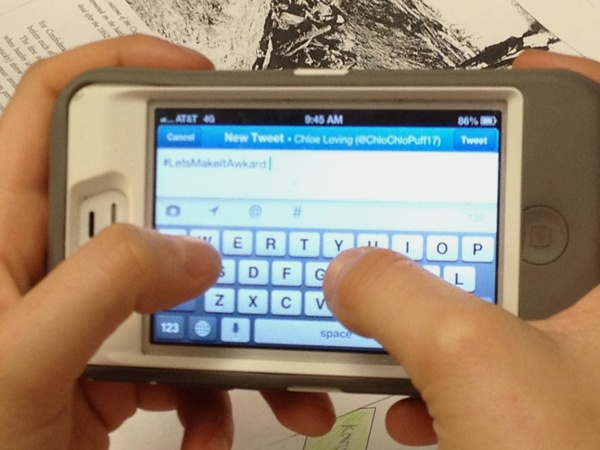 The hallways at AHS over the last several weeks have resembled the scene in Mean Girls where the burn book gets published and complete chaos breaks out over the school.

In such a technologically based society it’s no wonder that Twitter has been the root of drama that has had AHS students and faculty on edge. Inappropriate tweets about fellow students have led to several serious, violent fights during school, over ten suspensions within two weeks and a video of two students fighting in the hallway that went viral.

It all started with a “Let’s make it awkward” Twitter trend where students posted embarrassing stories or secrets about one another in hopes of making the other person feel uncomfortable. The tweets got too personal too quickly and peoples’ feelings started to get seriously hurt.

“I think the ‘Lets make it awkward’ trend tweets were funny and that administration took it too far,” junior Mohaned Zyoud said. “I don’t really think administration has the right to go through our Twitter accounts like they did.”

While some students took the tweets jokingly and lightheartedly, others found them offensive and rude.

“I am absolutely disgusted by the immaturity of my peers,” senior Kalie Rosati said.

After the fighting broke out, administration took action and announced that they would be going through students’ Twitters looking for inappropriate tweets and that there would be punishment. In response to this threat many kids put their Twitter accounts on private or even deleted them altogether.

“I made my Twitter private after all the drama just because administrators are focusing a lot of attention on Twitter so I don’t want to get in trouble for anything,” senior Julia Copenhaver said. “Also, I’m applying to college so I’m better off on private.”

Several students were suspended for five days due to negative tweets that targeted fellow students and one is being taken to court for cyber bullying.

“I don’t think most people would have said what they said if they knew they would get in trouble for it in school,” senior James Terrell said.

It seems like after any incident or drama a teen’s immediate response is to post it to the social media. But, they forget that teachers can easily go through their Facebook or Twitter pages and what they post can always be traceable. Once it’s on the Internet, it’s out there for the world to see; a concept that most kids fail to grasp.

“People use Twitter as a shield and harass people when they have nothing interesting in their lives but to talk about others,” junior Alexia Sung said.

The fights from the “Let’s make it awkward” tweets weren’t the only major drama from Twitter this year. After incidents at the West Potomac versus Annandale volleyball game, fights broke out via Twitter between the two schools sparking a rivalry. Once again, very offensive things were said by people on both sides causing hurt feelings and unnecessary drama.

“The Twitter fights are dumb because people don’t need to take it that far,” freshman Grant Thompson said. “You shouldn’t hide behind the computer and say bad things about people.”