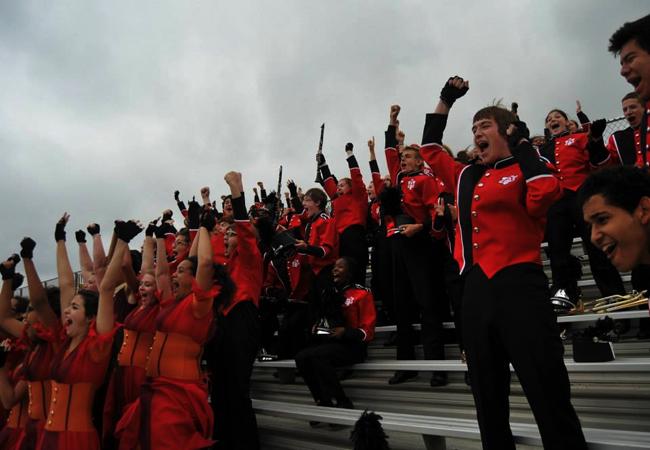 The Marching Atoms celebrated their superior score at their annual state assessment.

The Marching Atoms received a score of “superior” for their show Music of the Night at state assessments. Superior translates to one on a scale of one to five and is the highest possible score.

“Without a doubt, Saturday’s performance was easily the best performance [the Marching Atoms] have ever had,” band director Adam Hilkert said. “They really went out there and turned nervous energy into passion and demonstrated a lot of maturity and really performed in a superior way. They definitely earned that superior.”

Atoms celebrated their high score as the result of several months of continual practice, weekly competitions and performances.

“We had all worked extremely hard,” senior Ryan FitzGibbon said. “But the hard work paid off.”

The marching band had aimed to improve their score and surpassed last year’s score of “excellent,” or 2 on a scale of one to five.

“It felt amazing,” junior Peter Baek said. “It proved that we could achieve musically while having fun at the same time. All the hard work and dedication truly made the difference.”

The assessments were held at Liberty High School on Oct. 19. Participating bands were judged on their overall effect, music, and visual performance. Music of the Night consists of three parts: an opener, Toccata and Fugue in D Minor, a ballad, Music of the Night and a closer, Masquerade.

“The ballad really sold the show to me. The opener was nice and strong, but the ballad was really the heart of the whole show,” Hilkert said. “That is what really holds it all together and it was probably the most heartfelt performance they have done… and then when it went into Masquerade, it just kept getting better and better.”\

The Marching Atoms will continue to practice for their last few performances including the band’s traditional parades and their first time competing in the U.S. Bands Mid-Atlantic States National Finals on Nov. 2.

“We’ll see how we can make the show even better still,” Hilkert said. “There’s always room to improve and perfect. Our mission all year is to strive for perfection and see how close we can get.”