Atoms can’t put down the can 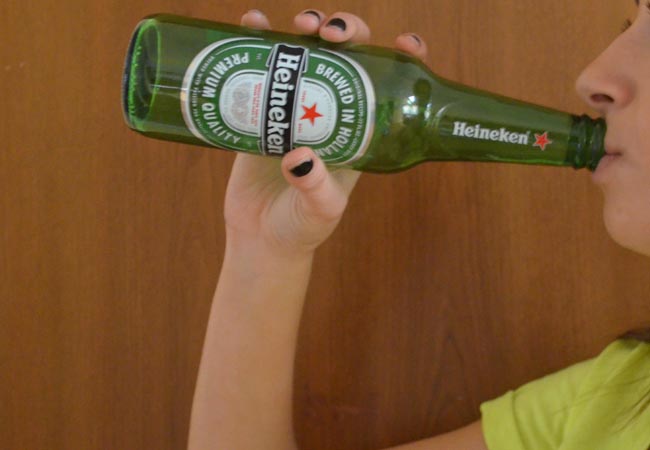 “Chug, chug, chug, chug!” It’s friday night and your best friend’s parents are out of town. Fifty plus kids from your school showed up with cases of beer and liquor ready for the night. The keg is set up in the corner, the girl from your algebra class is already throwing up in the bathroom, and half-naked girls are dancing on the table top.

Although this is the image that the media has created of the average high school weekend night, does it really hold truth at Annandale?

“Drinking is a common thing at Annandale. I think students drink alcohol to relieve their stress and have a good time with their friends,” senior Nick Torrico said. “It really is not that hard to obtain alcohol as a minor, you just have to know the right people.”

These Friday night scenes usually end with massive regret, a massive hangover, or an even more massive lawsuit, so why do kids still insist on drinking? What is the appeal of something that so often ends with a negative outcome?

Drinking has always been a prominent aspect of the American culture, especially amongst adolescents. But what has perhaps been the biggest change in regards to drinking, is society’s view of it. This idea that you have to drink to be “cool” has become more and more common in high school. Kids drink not because they want to, but because they feel like they have to. Too often teens forget that they have the option to say “no.”

“It’s not lame to not drink because that’s a choice the person made and it’s respectable. I think people think that if they drink it’ll make them cool but it doesn’t,” junior Lee Hayes said.

Beyond peer pressure, there are many other factors that cause kids to turn to alcohol for fun.

“I almost think the allure of it is actually stronger when you’re underaged and it has just gotten to the point where that’s like the cool thing to do. It has almost become a reverse stigma because like drinking underage is not supposed to be a good thing, but to them its the cool thing to do,” English teacher Julia Hanneman said.

In a hurry to grow up, many kids resort to drinking to make them feel more mature. “It could also be high school kids exposure to college life and how drinking is much more acceptable there,” English teacher Carmen Bartley said. “So I feel like maybe as kids get into later high school years they’re preparing for college.”

Since alcohol is age restricted, kids who drink underage feel like they’re older when they drink. But participation in such activities requires responsibility and maturity, which isn’t exactly common in the average teenager. Even though there are several alternatives to drinking, students still get involved with the drinking scene.

“More and more kids seem to be forgetting that you can have fun without drinking,” Hanneman said.For many students drinking is not frowned upon anymore and instead it’s a way for them to make memories and have stories to talk about with friends.

“I have heard of way too many stories of people being drunk. The craziest one is probably this one time where someone I knew was intoxicated to the point where he believed he was a drug dealer so he tried to sell drugs to a police officer,” Torrico said.

In many European countries, the age for drinking is 18 or lower, yet binge drinking isn’t as common in such places. Perhaps it is the American “culture of excess” that leads people to drink until they are vomiting or passed out. Or it is the idea of doing something you aren’t allowed to do that draws them in. Whatever it is, students have tendencies to go beyond their limit and not be responsible when it comes to alcohol. It has gotten to the point where kids don’t drink to sip, they drink to get drunk.

“Binge drinking is definitely a problem at Annandale. Before football games and at parties, some of my friends drink to get drunk, and some even pass out,” senior Jocelyn Hotter said.

Drinking at such a young age has many consequences beyond the obvious legal ones. “If you look at the statistics of people that get addicted, the younger you start with things the more likely it is [to get addicted],” social studies teacher Holly Miller said.

At the end of the day, high school is all about making new friendships and experiences that you can remember and cherish for the rest of your life, not forget the next day. Never forget that you always have the option to simply say “no.”