Stop the hate on Kaepernick 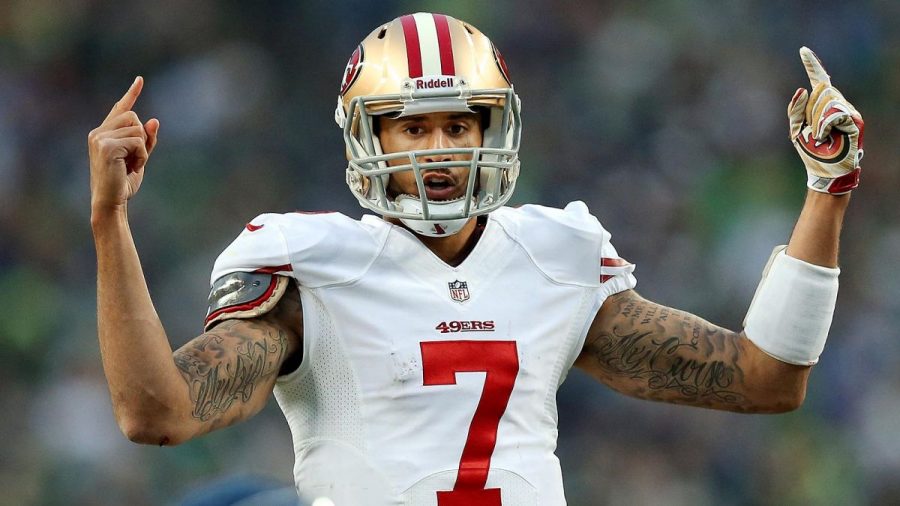 Kaepernick under fire for sitting during anthem.

In what would have been a rather normal pre-season football game against the Green Bay Packers has turned into international news after quarterback Colin Kaepernick for the San Francisco 49ers refused to stand for the singing of the national anthem.

Kaepernick was sitting in uniform in the game against the Green Bay Packers to protest against racial oppression in the United States. The quarterback has always publicly voiced his discontent with the way African Americans and other people of color are treated via his Twitter feed.

Many are in support of Kaepernick’s action, but there are also some that are angry. Kaepernick is receiving backlash claiming that it was disrespectful and against regulation for the him to sit and some even want him off the team. However, these people should know that Kaepernick’s decision was perfectly legal.

The NFL encourages, but does not require a player to stand for the singing of the National Anthem.

Kaepernick was simply exercising his Constitutional right to protest. President Obama has backed this argument, and says that Kaepernick has sparked conversion around a topic that needs immediate attention.

This actually is not the first time Kaepernick has remained seated during the national anthem, the quarterback has been protesting throughout the whole preseason.

The unnecessary amount of resentment against Kaepernick is promoting extreme nationalism that can quickly go out of hand.

Instead of hating on a football player who is simply showing his rights, people should respect his decision not to take part in celebration of the anthem. The attention should be directed to the very cause Kaepernick is trying to promote: equality.

Kaepernick had succeeded in garnering the attention of the American public, and hopefully, change can follow suit.

In addition to having the right to remain seated during the national anthem, it should also be known that students are not required to participate in the recitation of the Pledge of Allegiance.

For the majority of American public school students, standing up every morning and repeating the pledge from memory with their hands over their hearts has become a habit.

Patriotism has become a crucial part of American culture, and it is wonderful that citizens are displaying love for their nation. However, it must be understood that freedoms and rights are the very ideals that America was founded upon, and should be just as important to Americans.