“It’s never to late to leave: Late, A Cowboy Song” 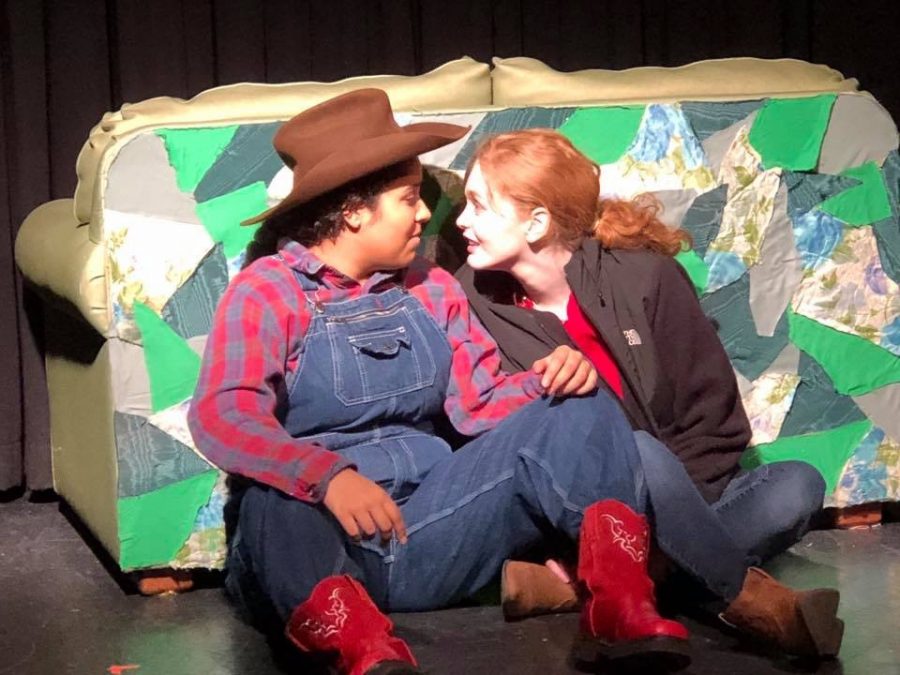 The show “Late, A Cowboy Song” is targeted to enlighten people, kids in particular, about abuse. The show was originally played to target 13 to 18 year olds, letting them know what to do in situations like these in the future.
It lets them know that it’s never too late to leave, it even teaches the audience that a person shouldn’t be in an abusive situation to start with.
Throughout the whole show we see three characters come in, Mary played by sophomore Savannah Gravitt, Crick, played by sophomore Raffi Krikorian and lastly Red, played by sophomore Makayla Collins.
Mary and Crick have loved each other since the second grade. They have the same birthday and they thought they used to want the same things in life. It was perfect for them when they were younger.
They thought it was faith that put them together; that they should spend their lives together. Well at least they used to have these thoughts, until Red came into their lives.
For some time now, Mary has continuously been emotionally scarred because of Crick and his behavior. Mary is in a never-ending cycle with Crick. He has never physically abused Mary even though he has thought about it many times.
Sometimes Mary has a hard time saying what she feels out loud. She has this diary where she writes everything that happens to her.
Since Crick wanted to know everything that’s going on in Mary’s life, one day when he found the diary he opened it and ended up reading the whole thing.
Mary caught him red-handed and was very mad and upset he would do this to her. She later ended up leaving to go to her mother’s house.
Mary was so stressed about life she felt as if she didn’t have anymore normal days, she felt as if everyday was a holiday.
Mary doesn’t want Crick to know what was going on in her life. However, he eventually reads and gets mad at her for spending too much time with Red.
Crick, Mary’s husband, was never consistent with his life. He never truly knew what he wanted. In the show we can see that he wants to hit Mary a couple of times, however, he always ends up backing away, because he sees how scared she is.
Crick is child-like, but despite this, Mary lends him $500, without knowing that he will end up buying a painting with the last of their savings.
Crick is a very spontaneous person: he even proposes to Mary without a moment’s worry after, when she told him she was late, period wise.
Once they got married, Crick and Mary have a hard time deciding the baby’s name. She wants to call her daughter Blue, inspired by the name Red, but he wants to call his daughter, Jill.
When Crick and Mary finally have their baby, she turns out to be half male and half female; she was intersex. After their daughter has surgery to officially be female. Mary has a hard time coping with this. She wants her daughter to choose her gender.
Crick, however, doesn’t agree with this. And yet again, they couldn’t make up their minds. The only thing that they could agree upon is the fact that Crick needs to get a job in order to support their baby.
Crick has a huge passion for paintings. He thinks that paintings are meant to be looked at for a long period of time, he didn’t like the fact that people only got to look at paintings for just five minutes. Which is exactly what Crick said during his interview, which lead him to get the job. Although, it didn’t last a long period of time, because he got fired shortly after for touching one of the paintings.
But he thinks it was worth it. He told Mary that he really wanted to touch the painting before they took it away. She couldn’t believe that he would risk it all just for a painting. Mary knows that, once again, it was up to her.
Fortunately enough, from all this frustration and stress that was put on Mary because of Crick. Red is able to show Mary that it’s okay to be late, it’s okay to be yourself and you should not care about what other people think.
To Mary, it just seemed as if she could talk to Red more than she could talk to Crick.
As the days went by, the more Mary wanted to be like Red. Even though they never really confessed their feelings for each other, it seems as if they had a strong passion towards each other.

Because Red was a cowboy, she acted more manly than lady-like.
Red shows Mary what it was like riding on a horse outside of the city limits.
Red is a free spirit that didn’t care about anything or anyone except her horses and Mary.
Mary’s and Red’s story never ended. As the show ends the more you want to know what’s going to happen. There were many unanswered questions, however, that is the beauty of theater.