Came for the desserts, stayed for the Broadway 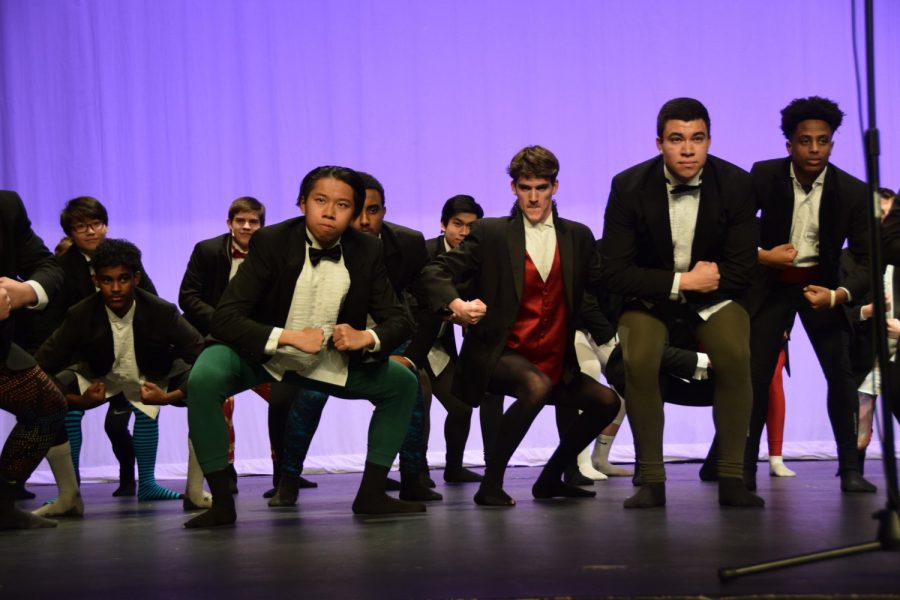 Mens Chorale wear tights to do the song "Men in Tights" from Robin Hood, justice.

The desserts made the people come, but the Broadway made them stay. Broadway Desserts held on Friday, February 2nd is an annual chorus sponsored night where choral students are able to sing Broadway hits that everyone has been belting out to or simply listening when they’ve been in a difficult place.

The whole show consisted of 30 acts that were specifically chosen from a group of 60 acts that were auditioned late last year. The whole process of Broadway Desserts is similar to how the Annandale choir students would be preparing for a Chorus concert.

The only difference is that Broadway doesn’t only include the singing and being able to steal the show with your voice, it also includes acting, lighting, props and exemplary costumes that allow the singers to fully commit to their role and being able to reflect the character singing the song at the moment.

There were a few full numbered songs that included the whole chorus company, individual choral groups, or even the Holmes Middle School Advanced choral groups. The pyramid Middle Schools are able to perform their own Broadway song and get a taste of how it feels to perform in their future potential High school auditorium. Holmes MS Advanced Men performed “Standing on the Corner” from the Happiest Fella, while the Advanced Women performed “What is this Feeling?” from Wicked. It left the audience enthusiastic and hopeful because these would be the future faces of the Annandale choral department, and they did not disappoint.

Aside from the MS performances, there is one of the main events that many people came to see, listen to and permanently remember, because of the phenomenal performance: “Men in Tights.” Many people could imagine that this could be a simple portrayal of a seeming childlike song in Robin Hood, but the Men’s Chorale made it something more interesting.

The intro to the song began with a seemingly relatable conversation between Wesley Vaughn and Elliot Awes discussing their senioritis. But what everyone didn’t realize was that behind them were 40 men in tights. The opening of the curtain immediately made the whole audience burst into laughter and become intrigued by their song.

It was simply a night to remember. There were countless amazing acts that were sung from a wide variety of musicals, such as Rent, The Book of Mormon, Dear Evan Hansen, Mary Poppins, and though not a Broadway musical, High School Musical “We’re All in This Together.” It left the audience in tears from their pure amusement or simply from the beautiful voices that were showcased. Everyone should come to see the last performance of the Annandale Choral Department on Saturday, February 3rd at 7 pm, that will include the voices from Poe Middle School.