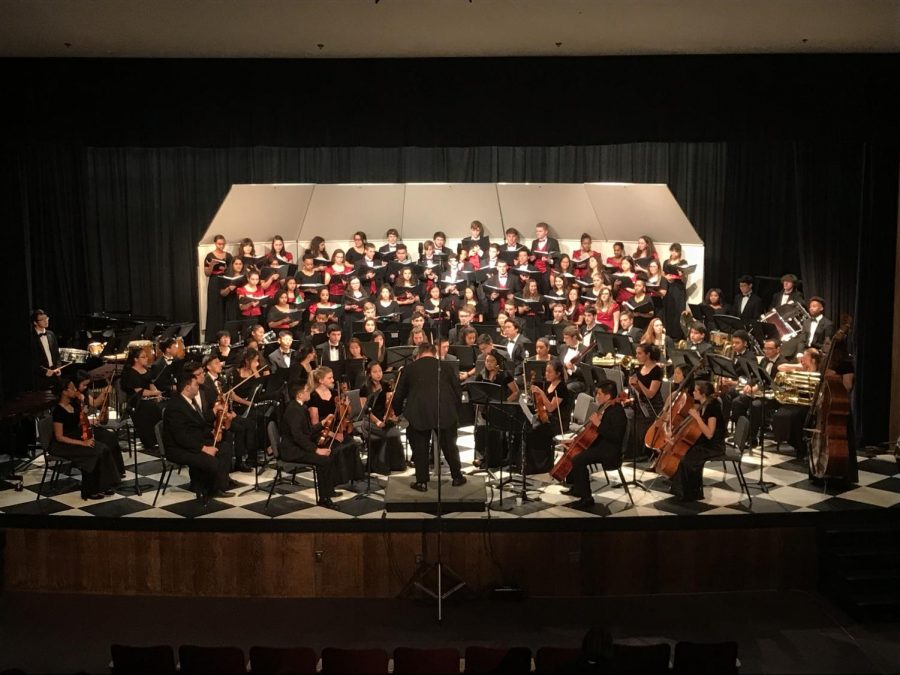 Sitting in the auditorium seats, surrounded by people like yourself, all dressed in black suits or dresses. Everyone awaiting their turn to go up on stage, and play alongside similar musicians of equal or greater talents than they can imagine. Senior and orchestra player, Jane Haberle, is apart of those top musicians who awaited to perform at the annual Trilogy Ensemble Concert.

“This is my second trilogy concert that I have performed at, for this one, I am a lot more relaxed because a lot of us have done it before and we became pretty comfortable because we kind of know what to expect this year,” Haberle said.

This concert combined the top orchestra, band and choir, where they all performed together in different pieces and showcased their individual talents through the various songs that they performed. The Trilogy concert was an idea from a former administrator who wanted to join the forces of the musical performing arts in one night.

“This trilogy concert would offer the audience the opportunity to get a sneak peak in the spring concerts, and it will get them interested to know how the final results are,” said junior and band player Esteban Guerreno.

One of the first pieces that began the concert was with the wind ensemble conducted by Joseph P. Witkowski, who performed “There Will Be Rest” by Frank Ticheli. In such performance, the audience members could feel the vibrations of beautiful music bouncing off of the walls, surrounding yourself and entering your ears.

After the wind ensemble, the Annandale Singers performed another song. Instantly when they began singing, “REST” by  Frank Ticheli, the wind ensemble members turned their heads to see how our fellow atoms could sing such melodious tunes. If they didn’t have their heads turned, then they closed their eyes, trying to understand the music and get a picture of what Ticheli meant through the highs and lows of the music.

“I hope to see all the performing arts bonding together nicely, as we did during our rehearsal, in which we played one song and it all sounded well together,” said Guerreno.

Each person in the band, orchestra and chorus were able to bond with each other- some of band and chorus members got closer even after their previous performance in the theater musical of “The Hunchback of Notre Dame,” last month.

“For singers, we came out of doing the theater musical, ‘he Hunchback of Notre Dame,’ so we only had like three rehearsals before doing this, and we only learned one piece of new music, but we are prepared. I hope to see all the arts unified, and working together, we can hear and respect each other’s music more,” said junior and Annandale singer Garrett Patterson.

Though the whole process was strenuous, it proved to be well worth it in the long run.

Audience members were able to see the performing arts all together; even theater, since the stage still had the checkerboard pattern from the previous musical that has yet to be repainted.

“I hope to see orchestra, band and chorus become one person because I feel like its very different hearing it sung in an individual concert, versus as an ensemble. Through this concert, every musical instrument come together to sound like a symphony,” said junior and band player Maya Champion.

“I am really proud about us becoming a blue ribbon school, because all the musical programs are really good,” said Patterson.

The dedication by the students was immense when each musical arts department found out that they scored a superior rating. This is one of the highest scores that any music department would be able to receive for a day long assessment.

It allows the music students to showcase their talent and their hard work, all of which was credited when the students scored the best score possible.

“We can come in a play together with everyone and through this concert, it’s an opportunity to be with other people who have a similar passion in the arts,” said junior and orchestra player Jiafu Li.

Their passion for the arts or specifically their musical instrument, can be seen and heard throughout any performance by any one of the performing arts departments.

Though the trilogy concert showcases each music department all together, it allows the audience members to get a glimpse of what they would expect in future music concerts.

“The audience is able to hear and be impacted by beautiful music,” said junior and Annandale singer, Araceli Cabrera, “It would hopefully want them to come to more concerts and make them see all of the work that we do, and allow us to show our passion for the arts.”