“The biggest event in internet history” ends in draw 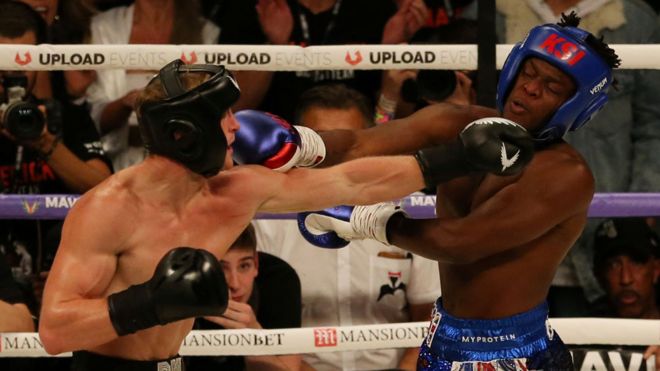 Logan Paul (left) and KSI (right) exchange blows during the third round of their fight on August 25. The fight consisted of six, three minute rounds.

After months of trash talk and ugly rumors, millions of online viewers and thousands in person watched two of the most popular YouTubers duke it out in the ring on Aug. 25. It was advertised as the biggest event in internet history, bringing in about 2 million worldwide viewers. The event was held in Manchester Arena, one of England’s most premier boxing venues, where 21,000 people from all over the world came to watch the bout.

Out of three judges, two scored the fight a 57-57 draw and the third judge scored it as a 58-57 KSI victory. This highly anticipated boxing match between two YouTubers had ended in a majority draw after six, three minute rounds.

Cynics called this fight a staged event so that the fighters could pocket more money after the rematch.While others just enjoyed the bout between two amateurs and are looking foward to it again.

This fight came to terms after KSI, whos real name is Olajide “JJ” William Olatunji, challenged Logan Paul after his previous boxing match against Joe Weller, another YouTuber on February 3, 2017, which he won.

KSI is based out of England, as are most of his 19.5 million subscribers. KSI is from Watford, England and is known for his vlogs and rapping on his YouTube channel.

As for Logan Paul, he gained popularity by making short videos for the ap, Vine. Paul later created a YouTube channel and uploaded vlogs after Vine started to die down. Paul gained infamous global notoriety after posting a video of a man who hanged himself in the Japanese Suicide Forest. Logan Paul has now gained over 18 million on YouTube.

Despite the two million online viewers, more were expected to watch. The fight was being streamed live on YouTube for $10 but only about 830,000 bought the fight legally, while the others found pirated versions of the fight on other sites, like Twitch, one of YouTube’s biggest competitors. Seniors Hunter Shinstock and Fares Ayoub are of the thousands who bought the fight.

“I bought the fight because I watched a lot of Logan Paul before he uploaded the suicide forest video,” said Shinstock. “I wanted to see him lose and see how he would act online after all the trash talk.”

The event featured seven fights, and all were announced by boxing legend Michael Buffer, all between popular Youtubers.

The fight started out extremely strong for Logan Paul, as he won the first two rounds easily.

“After I watched the first two rounds I thought Logan was going to win by a knockout, KSI seemed like he wasn’t doing anything right,” Ayoub said.
In the third, fourth, and fifth rounds KSI seemed to find his footing and began to land some strikes on Logan. Every time KSI landed a punch everyone in the arena would go crazy, it seemed as if there was nobody rooting for Logan Paul.

As the fight progressed Logan started to get tired and his punches started slowing down. But in the middle of the fifth round the fight was close to being over as Logan Paul unloaded over 10 punches on KSI’s head and made him look helpless. Though, after the exchange KSI seemed unfazed.
“I thought the fight was over after those punches,” Ayoub said. “I was screaming at my TV in excitement, I thought the official should have called the fight then.”

KSI rebounded in the final round by dominating Logan and forcing him to clinch onto to KSI in order to avoid punches. There was multiple times when the crowd and the announcers thought KSI was going to knockout Logan. The fight ended with KSI landing a strong jab that made the crowd go crazy.

“I thought the fight was even but I was thinking the judges were going to give the win to KSI because it was in his home country and he ended very strong in the final round,” Shinstock said.

After the final bell rang both fighters were celebrating with their teams and coaches as if they had won.

“Logan really showed the judges in the early rounds that he deserved to win, he used his height and reach to his advantage,” Ayoub said.

The trashtalk didn’t end there as Logan Paul called out KSI for his swelled eye that Logan gave him moments before. The two have agreed to terms for a rematch but have not determined a date or location yet, though the fight is rumored to be somewhere in America.

“The fight definitely lived up to the hype, it was a great fight,” Ayoub said. “I can’t wait for the rematch.”