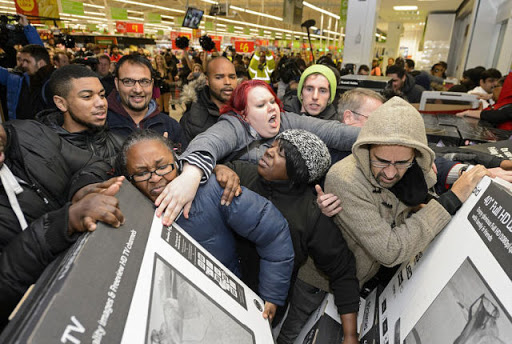 Stampedes, fights and severe exhaustion. Black Friday may seem like an innocent day to purchase items at their lowest prices, but that cannot be further from the truth. The attraction to sales make people crazy and greedy rather than thankful, resulting in a violent day where all common sense is abandoned.

There have been many deaths and injuries over the past years on Black Friday. For instance, in 2016, a shopper shot someone over a parking spot in front of Walmart. Despite the tragedy, the store stayed open for other Black Friday shoppers while police officers investigated the scene.

In 2013, a teenager named Patrick Henry Boyd died because he fell asleep at the wheel after a late night Black Friday shopping spree. He ran off the road and hit a sign in front of a gas station, landing himself and the four other passengers of the car in the hospital.

Some people remember Black Friday solely as the day they bought that cute pink sweater from Forever 21 or scored a pair of usually expensive sneakers from Foot Locker. What about the vast majority of people who get into a brawl or slammed into a wall?

“When I was ten years old, I walked into Best Buy thinking I would come out with a new iPad,” sophomore Kalkedan Gashaw said. “I was there for a good five minutes before some stranger running to the checkout line slammed his hand into my face knocking me off balance. My face was so red, I never even got an apology.”

“Last year, I was at Tysons Corner with my baby sister,” Anwar said. “There was this guy who was pushing his way through a store, and he tripped over my sister’s stroller. I guess he hurt his wrist badly because he started moaning and holding onto it while rocking back and forth. His friend started yelling and telling me to watch where I was going. We started arguing for a long time, but I decided to be the bigger person and walk away.”

Black Friday sales aren’t just available in stores. They can also be found online for a longer period of time. Why freeze in the cold when you can shop from the comfort of your home?

“I hate walking around, especially in a crowd and when there’s so much noise. Online shopping is the way for me,” sophomore Elsa Amurrio said.

There’s no denying that Black Friday helps a lot of people save money and get a start on their Christmas shopping, but people should be able to do that without putting themselves at risk.