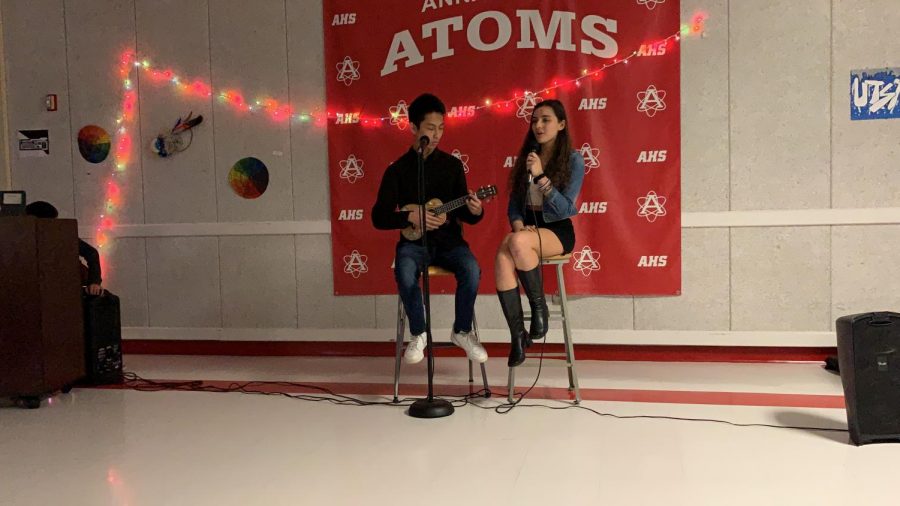 Juniors Elvera Miller and Jimmy Le perform "Sunflower" at the Coffee House hosted by the Filament Literary Magazine on Jan. 23.

“We are really excited about Coffee House for the rest of the school year,” Filament Co-Editor in Chief Evelyn Nguyen said. “The event is only growing and is getting bigger and better.”

After holding auditions on Jan. 9, performers for the Coffee House were selected. There were a total of 12 performances with some individuals performing multiple times.

The Coffee House opened with a performance from the band “Chicken and Waffles” who played their version of “Seven Nation Army” after being introduced by the host for the evening, senior Ayman Elhag and junior Tarik Darweish.

Multiple duets were featured at the Coffee House including a performance by juniors Elvera Miller and Jimmy Le who sang “Sunflower.” Seniors Melat Habte and Mikal Cheffena also performed the song “Listen.”

Additional spoken-word poems were featured at the Coffee House as well such as “1077” by junior Kadijeh Janneh and “Handed down problems” by freshman Crubel Dawson.

There will be two more Coffee House’s set to take place this school year on March 6 and April 10.